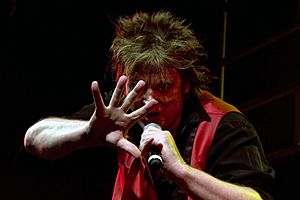 Bernard Patrick "Doc" Neeson OAM (4 January 1947 – 4 June 2014) was a Northern Irish-born Australian singer and musician. He was best known as the lead singer for the hard rock band The Angels. He performed also as a bass guitarist. Until his death, he had been musically active since 1971. He later formed the band Red Phoenix in May 2005.

Neeson was born in Belfast, Northern Ireland. When he was thirteen in 1960, his family moved to Adelaide, South Australia. He served in the Australian Army in Papua New Guinea for eighteen months in the late 1960s.

Neeson died from a brain tumour on 4 June 2014 in Sydney, New South Wales, aged 67. He had been diagnosed with cancer in January 2013.

All content from Kiddle encyclopedia articles (including the article images and facts) can be freely used under Attribution-ShareAlike license, unless stated otherwise. Cite this article:
Doc Neeson Facts for Kids. Kiddle Encyclopedia.