Kids Encyclopedia Facts
This page is about the major shopping centre. For other uses of the name, see Warringah. 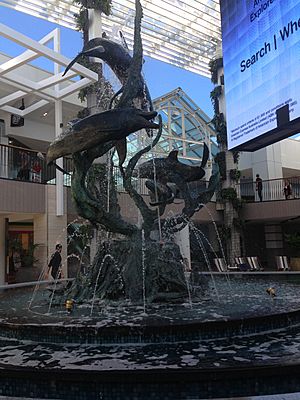 "Pacific Family" by Victor Cusack (1988), at the centre court 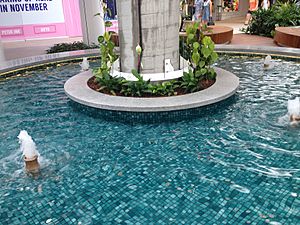 Another fountain at Westfield Warringah Mall

Westfield Warringah Mall (previously known as Warringah Mall or colloquially as The Mall) is a large indoor/outdoor shopping centre in the suburb of Brookvale in the Northern Beaches region of Sydney.

Warringah Mall opened on 4 April 1963 and was developed by Hammerson Group around with around 53 stores, including H. G. Palmer (closed 1965), Nock & Kirby, Grace Brothers, Woolworths and David Jones. Ten years later, the centre saw the opening of a new Grace Brothers store which was upgraded from a homemakers store in 1973. The same year a fire broke out in the original Woolworths store which killed two female workers. Fifty more speciality stores have also opened, followed by the opening of the Hoyts Twin Cinema Complex in the early 1980s. Warringah Mall was featured in the movie BMX Bandits with two young BMX experts, P.J. (Angelo D'Angelo) and Goose (James Lugton), meet Judy (Nicole Kidman) who was working as a trolley collector. In the mid-1980s, a Target store was opened along with 20 speciality stores. Warringah Mall was included in the sale of Hammerson's Australian property portfolio to AMP Capital in 1994.

In the late 1990s, the centre was expanded, with Woolworths having been relocated. The centre opened in December 1999, with approximately additional 90 stores. The development included an additional food court, extra cinemas, another 60 speciality stores, followed by the opening of a Coles Supermarket and Dick Smith Electronics Powerhouse in 2000.

In October 2012, AMP Capital and the Westfield Group swapped interests in seven centres, including Warringah Mall which became a 50/50 joint venture between the two companies. As part of the deal, centre management transferred from AMP to Westfield with the centre rebranded Westfield Warringah Mall. In July 2014, as part of a restructure of the Westfield Group, it came under the control of the Scentre Group.

In mid-2015, Westfield Warringah Mall underwent a $310 million redevelopment. Stage 1 of the redevelopment has been completed with the opening of the 5 level multi-storey car park and a new fresh food court opened by My Kitchen Rules 2015 winners Will and Steve.

Stage 2 of the redevelopment was completed in November 2016. Myer was temporarily closed for refurbishment and was opened by Australian model Jennifer Hawkins.

Westfield Warringah Mall has bus connections to the Sydney CBD, Lower North Shore and the Northern Beaches, as well as local surrounding suburbs. It is served by Forest Coach Lines and Keolis Downer Northern Beaches, the latter operating the B-Line services. The majority of the bus services are located on Pittwater Road and the bus interchange inside the centre. There is no railway station at Brookvale; the nearest station is located at Chatswood.

All content from Kiddle encyclopedia articles (including the article images and facts) can be freely used under Attribution-ShareAlike license, unless stated otherwise. Cite this article:
Westfield Warringah Mall Facts for Kids. Kiddle Encyclopedia.