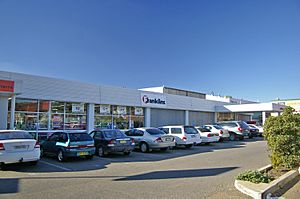 Franklins is a cheap supermarket company in New South Wales in Australia. At one time, it had shops in other states of Australia.

The name of the shops is named after Frank Lindstrom, who started Franklins in 1941 in the city of Sydney in Australia. The shops were created in a time when other supermarkets had low prices, by keeping expenses low. It grew to cover much of New South Wales, Queensland, Victoria and South Australia with a reputation for low prices on groceries. It claims to be Australia's Original Discount Grocer.

Franklins was the first supermarket in Australia to have brand name products. These products are called No Frills. In fact, the company's shops only sold these products when it first came about. It started out with a few products but now they have 800 products. This ranges from bread to window cleaners. Today, a mascot of Franklins called Red Sock advertises these products.

Franklins offers a wide range of products including No Frills. Franklins mostly deals in food and everyday articles. It even has Franklins brand name products like bread and meat.

A wide range of people shop at Franklins to buy a wide range of articles. In some shops, people can buy their food and everyday articles at Franklins. They can then buy their fresh food outside of the store. In other stores, people can get fresh food articles as well as food and everyday articles all in the one place. Franklins even has a 'bottle shop' inside a few stores where people can get their beer and wine from. These places are both cheap and convenient to shop in.

When Franklins first started, their business philosophy was like Aldi's: No extras, no service, no music and no electronic cash - only articles at extremely low prices or as Franklins had put it: Strictly No Frills. Because of big competition with other "good-looking" shops, it no longer follows this philosophy.

Franklins is still cheap but it has more competition from other markets, such as Aldi. Today, Franklins is owned by the Pick n Pay supermarket company from the country of South Africa. It has opened Franklins Family Supermarkets in 2006, independently franchise shops of both Franklins and Pick n Pay.

All content from Kiddle encyclopedia articles (including the article images and facts) can be freely used under Attribution-ShareAlike license, unless stated otherwise. Cite this article:
Franklins Facts for Kids. Kiddle Encyclopedia.