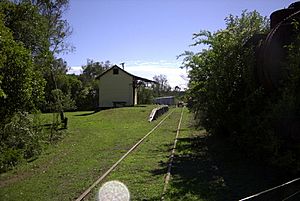 The town lies inland from Coffs Harbour by 36 kilometres (22 mi). Whilst a short distance, it takes 45 minutes to drive to, through rainforest. Ulong is on the Dorrigo Plateau and sits some 1,700 feet (520 m) AHD . The climate is markedly different from Coffs Harbour. Ulong is known as the "Village in the Valley".

Once larger than Coffs Harbour, it was a centre for the timber industry. Hoop pine, tallowood, black butt were all milled extensively. There was gold in the hills too. Georges Gold Mine is open on occasion as a tourist attraction. Ulong is on the road to Nymboida River and borders one of its tributaries, the Little Nymboida River.

The Australian National series Enduro motorcycle Championships took place over two days in and around Ulong in 2007. On 9 September 2011 a special stage of the World Rally Championship was held in the area. These events make use of the roads within the extensive array of State and National parks in the area. [1]

All content from Kiddle encyclopedia articles (including the article images and facts) can be freely used under Attribution-ShareAlike license, unless stated otherwise. Cite this article:
Ulong, New South Wales Facts for Kids. Kiddle Encyclopedia.