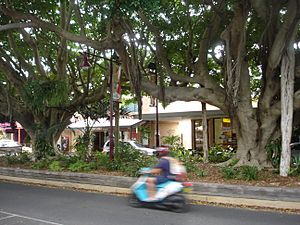 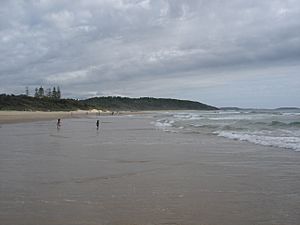 View up Sawtell's beach to the northern end

In 1863, a cutter carrying a load of cedar logs ran aground on what would become Sawtell Beach. A Coffs Harbour farmer named Walter Harvey assembled a team of workers to salvage the logs, and a small settlement developed near the site of the wreck.

Forty years later, the land around Sawtell Beach was purchased and subdivided by Oswald Sawtell for housing and farmland. Sawtell railway station, post office, school and hotel followed soon thereafter and by the 1930s Sawtell had become a thriving coastal village.

The original inhabitants of the land were Aborigines of the Gumbaynggirr clan. The Aboriginal name for the land where the town now stands was Bongil Bongil.

A suburb of Coffs Harbour Regional Centre, Sawtell is located on the north-eastern coast of New South Wales, adjacent to Toormina and Boambee, and 10 km south of Coffs Harbour. It is served by the North Coast railway line with six XPT services daily, three heading north and three south. Sawtell station is an optional stop for all of them. Coffs Harbour Airport is located just to the north of Sawtell with the runway ending just to the north of the town. It is serviced daily by Virgin Australia and QantasLink.

Sawtell has a population of 3,490 people. Aboriginal or Torres Strait Islander people make up 3.78% of the population.

Sawtell, Toormina and Boambee (all with postcode 2452) have a combined population of 15,010 people, 5.06% of whom are Aboriginal or Torres Strait Islanders.

Sawtell beach extends north from Sawtell Headland and the sheltered Sailors Bay swimming area to Murray's beach. The beach is patrolled by the local Surf Lifesavers who run Sawtell Surf Club half way along the beach. Due to the dunes there are no true beach front properties on Sawtell Beach. Some properties look over Bonville Creek and some over Murray's Beach. The beach has singing sand when walked on in dry conditions.

All content from Kiddle encyclopedia articles (including the article images and facts) can be freely used under Attribution-ShareAlike license, unless stated otherwise. Cite this article:
Sawtell, New South Wales Facts for Kids. Kiddle Encyclopedia.