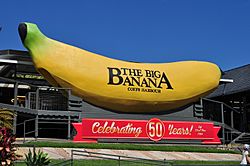 The Big Banana is a tourist attraction and amusement park in the city of Coffs Harbour, New South Wales, Australia. The Big Banana is in a banana plantation, and has a large walk-through banana model. It was opened on 22 December 1964. It was one of Australia's first big things. The site includes laser tag, mini golf, ice skating, a theatre for learning, a toboggan ride and a water park.

All content from Kiddle encyclopedia articles (including the article images and facts) can be freely used under Attribution-ShareAlike license, unless stated otherwise. Cite this article:
Big Banana Facts for Kids. Kiddle Encyclopedia.