Carnarvon is a coastal town situated approximately 900 kilometres (560 mi) north of Perth, Western Australia. It lies at the mouth of the Gascoyne River on the Indian Ocean. The popular Shark Bay world heritage area lies to the south of the town and the Ningaloo Reef and the popular tourist town of Exmouth lie to the north. Within Carnarvon is the Mungullah Aboriginal Community. Inland, Carnarvon has strong links with the town of Gascoyne Junction and the Burringurrah Community. At the 2011 census, Carnarvon had a population of 4,559.

The Inggarda people are the traditional owners of the region around Carnarvon. Before European settlement the place now called Carnarvon, located at the mouth of the Gascoyne River, was known as Kuwinywardu which means "neck of water". Australian-Aboriginals associating with the Carnarvon area typically associate as being Yamatji, traditionally speaking the Wajarri language.

The town was founded in 1883, initially as a port and supply centre for the surrounding region, and is the administrative centre for the Shire of Carnarvon. The town site was officially gazetted on 4 June 1891, named after Henry Herbert, 4th Earl of Carnarvon, a past Secretary of State for the Colonies.

Carnarvon has had three tramways.

Carnarvon has a warm semi-arid climate. Average yearly rainfall is 226 millimetres (8.90 in) with the rainiest months (and the most reliable rainfall) being between May and July as the northern edges of winter cold fronts brush the region. Occasional tropical cyclones affect Carnarvon during the summer months bringing heavy rain and strong winds. Apart from this erratic source of rainfall summers are normally dry. Temperatures range from an average maximum of 33 °C (91 °F) in February to 22 °C (72 °F) in July. Average minimums are 23 °C (73 °F) and 11 °C (52 °F) respectively. On 6 March 2007, Carnarvon equalled the record for Australia's hottest March temperature with a maximum of 47.8 °C (118.0 °F); this temperature had previously been recorded in the Western Australian town of Roebourne on 4 March 1998. 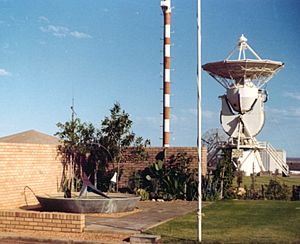 During the 1960s, NASA set up a tracking station nearby to support the Gemini and Apollo space programs. The tracking station was closed in the mid-1970s. Only the foundations of the historical site remain. The site is adjacent to the OTC Satellite Earth Station Carnarvon.

On 20 May 1988, the bulk carrier Korean Star ran aground in bad weather near Cape Cuvier, within the port limits of Carnarvon. Around 600 tonnes of fuel oil were spilled into the ocean. Damage was limited to 10 km of remote beaches and coastline. The ship was not salvaged and left grounded, however very little of the wreck remains to be seen.

All content from Kiddle encyclopedia articles (including the article images and facts) can be freely used under Attribution-ShareAlike license, unless stated otherwise. Cite this article:
Carnarvon, Western Australia Facts for Kids. Kiddle Encyclopedia.