Arcola is a heritage-listed former residence and now bed and breakfast at 150 Victoria Street, Grafton, Clarence Valley Council, New South Wales, Australia. It was built in 1907. It was added to the New South Wales State Heritage Register on 2 April 1999.

Early survey and layout of Grafton

Governor Darling directed all Government surveyors to classify towns into 4 types; Sydney, seaports, towns at the head of navigable waters and inland towns. Grafton fitted type 3, and was laid out between 1847-9 by William Wedge Drake in 200 m square blocks on a N/W/S/E grid, over the existing settlement based on a private entrepreneurial establishment. Land grants accelerated from 1857 onwards. The early survey accounts for characteristics that influence the development and urban consolidation of Grafton today, including block size, deep allotments, wide streets and large verges allowing for substantial tree planting, grid layout, with street corners that intersect with the counter curved river banks. Arcola is a rare record of an original subdivision, the site on a typical river junction corner having no dominant street frontage but with the house addressing three frontages.

Robert Roland Smith a wealthy grazier who owned considerable property in the Coaldale and Glenagle district, builder and architect to design it and H. F. Sault to build it, in 1907. Local press described it as one of the best and most imposing private residences in Grafton. Smith was a prominent citizen, busy in local organisations including the Clarence Pastoral & Agricultural Club and Jockey Club, a noted horseman and founding member of Grafton's Lancers. His wife's family were early settlers. Their daughter, Violet, lived there from 1918.

In 1918, a number of interior fittings were removed from the property. Sewerage was installed c. 1934, accessing the house from the north-east corner; also by then the rear north-east corner addition of toilet and cupboard was built. The cupboard section of the additions appears to be infill of the eastern end of the verandah. A portion of the yard rear to the stables was also fenced at this time. The house remained in the Smith family until bought by Mrs Wilkins in 1989.

In 1989-90, new wiring and plumbing was installed and the roof was repainted under the new owners, the Wilkins. In 1991, underpinning was installed to the existing footings to prevent subsidence. Mrs Wilkins was a foundation member of the Clarence Naturalists Club and created a magnificent garden. c. 1992, the outside toilet, the cactus plant which had covered most of it, and an adjacent tamarillo tree (Cyphomandra betacea) were all removed. A mandarin tree was severely pruned, a persimmon tree (Diospyros kaki) (mature) cut down, and a large 18-20m tall Bangalow palm (Archontophoenix cunninghamiana) had lost most of its healthy condition/at risk. The house exterior and some of the interior was painted in a non-approved/non-heritage colour scheme, timber Venetian blinds were removed from the front verandah, and a timber slat greenhouse/fern house which adjourned the rear verandah was removed. The contents of stables including chaff bins (very old, pine timber approx. 1.5m x 1m lined with a thin sheet of steel/tin, with the stamp of the Pitt Street, Sydney manufacturer on it) had been removed from the stables.

The Wilkins sold Arcola to Mr J. Arthur & Ms L. Bevege in 1997, who sold it to Mr & Mrs Coutts-Smith in 1999, who sold it to Ms R. Graves in 2002. Between 1995 and 2002, room 9 (the former maid's room) was altered to become a bathroom, with a new door opening made into it from room 5 (bedroom). The original external maid's room door (from rear verandah) was fitted to the new internal door space in 2002. The opening to the rear verandah was closed off using a door (fixed in position) that had been stored in the roof of the stables. Timber frame & sheet clad wall constructed inside external door. Bathroom fittings were rearranged and renewed. During this time, the external timber stairs to rear verandah were reconstructed with new stringer and timber square handrail (none existed before). In 2002, the roof sheeting and gutters were repaired, some downpipes replaced, copies of original gutters and finial ornaments (based on photos of originals) installed. 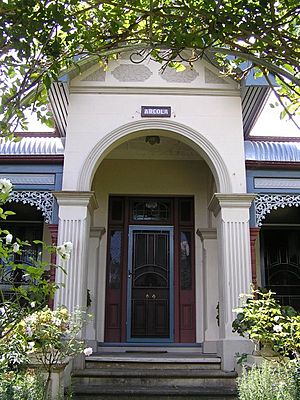 Arcola is a 1907 single storey Queen Anne revival style house, with a garden including mango trees (Mangifera indica) and stables to rear, in a streetscape setting with wide grassy verges, trees and views over the Clarence River. The front fence to Victoria Street/Clarence River and part of side fence to Alice Street is picket, side fences (remainder) are corrugated iron.

The house is rendered brick with hipped iron roof, decorative corner gables and impressive central gabled entrance portico. A bull-nosed verandah is supported on turned timber posts with cast iron valances and original timber venetian blinds. The front door has etched glass panels and sidelights; the windows are double hung with stained and etched glass. Internal details are almost all original: etched glass, doorknobs, fireplaces and surrounds, doorbell, rails and dados, pressed metal ceilings, light fittings etc. The room layout is reasonably sophisticated, intended to divide the maid from the family by means of a segmented hallway. In spite of a somewhat narrow verandah the building successfully modifies the climate with ventilated eaves, external venetian blinds and an elevated floor.

There are brick stables to the rear of the house.

A May 1999 pre-purchase inspection report raised a number of minor issues about the condition of the property. In July 1999 cracking of brick walls in the stables was noted due to drainage/groundwater collection, with repairs subsequently undertaken. In 2005, significant cracking was reported in both structural and non-structural components of the original section of the house in various locations. 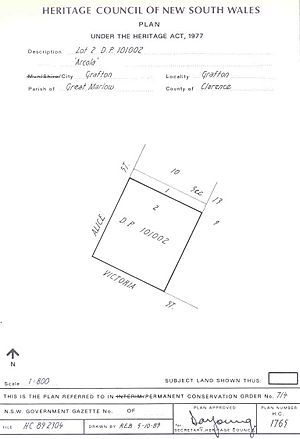 Arcola has social significance as it is held in high esteem by the Grafton community as a fine example of a federation house in a garden setting positioned in a pleasant street on the Clarence River;

Arcola has scientific significance as:

Arcola is also significant for its contribution to a group of spacious timber buildings in Victoria Street (the Grafton Conservation Area) recognised by the National Trust of Australia (NSW) as significant.

Arcola was listed on the New South Wales State Heritage Register on 2 April 1999.

All content from Kiddle encyclopedia articles (including the article images and facts) can be freely used under Attribution-ShareAlike license, unless stated otherwise. Cite this article:
Arcola, Grafton Facts for Kids. Kiddle Encyclopedia.