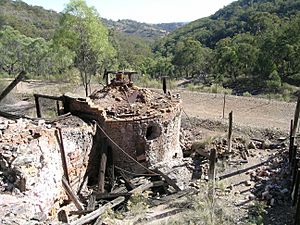 Ottery arsenic mine, near Emmaville. 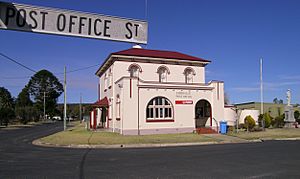 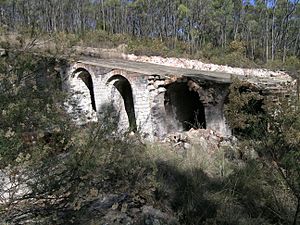 Ottery Arsenic Mine - note the traces of arsenic on the bricks

Emmaville is a village on the Northern Tablelands in the New England region of New South Wales, Australia. It is in the Glen Innes Severn Council district.

Emmaville is at an elevation of 890 metres AHD. At the 2006 census, the Emmaville "urban centre/locality" had a population of 247 (in the 2001 census it was 303) and there were 535 persons usually resident in the Emmaville region.

Emmaville is located on the lands of the Ngarabal people, and the area remains of great significance to them today. The Ngarabal name for the land where the township is now located is "Marran", meaning "plenty of leeches".

Tin was first discovered on Strathbogie Station in 1872 and the settlement was called Vegetable Creek after the Chinese market gardens which developed to service the mining population. Being a private township it was never notified or proclaimed as a town or village. The population of the area in the early 1900s was about 7,000 and included 2,000 Chinese people. It was renamed in 1882 after the wife of the then state Governor Lord Augustus Loftus. The name Vegetable Creek is preserved in the name of the local 17-bed hospital.

Emmaville established the first medical fund in New South Wales, with aim of keeping a doctor in town and to build a hospital. In 1891, lectures were given at the hospital and the St John Ambulance Brigade was formed as a result of this.

Tin and arsenic were mined at the Ottery Mine, Tent Hill not far from Emmaville, from 1882 when a huge tin lode was found by Alexander Ottery. The site has now been rehabilitated by the NSW Department of Mineral Resources and is open to tourists.

This is described as "one of Australia's most famous manifestations of a cryptic animal". It is variously said to be a large black panther or a marsupial lion, and was sighted in February 1958 and on various occasions in the later 1950s and 1960s. There are no native big cats in Australia. One suggestion is that this beast escaped from a travelling circus whose owner chose not to report the escape.

Emmaville's industries are tourism, agriculture, and mining. There is a Mining Museum which includes a collection of mineral specimens and photographs of the town's history. Fossicking is a local tourist activity.

This neat and tidy village has a post office, general store, two craft shops, a swimming pool, a caravan site and two hotels. Emmaville also has a pre-school and a central public school with 60 primary and 28 secondary pupils. Since 2004 Emmaville School has catered for stage 6 students in year 11 and 12 although all of their studies except English and Maths are supplied by Dubbo school of Distance Education. The Vegetable Creek Hospital in Emmaville has 17 beds and is part of the Hunter New England Local Health District.

All content from Kiddle encyclopedia articles (including the article images and facts) can be freely used under Attribution-ShareAlike license, unless stated otherwise. Cite this article:
Emmaville, New South Wales Facts for Kids. Kiddle Encyclopedia.