Bight of Benin facts for kids 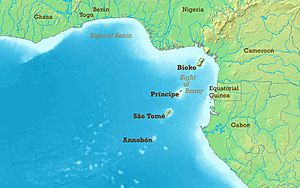 Map of the Gulf of Guinea showing the Bight of Benin.

The Bight of Benin is a bight on the western African coast. The bight is part of the Gulf of Guinea. The Republic of Benin and this bight were both named after the Benin Empire.

This area is known as the Slave Coast. This area was used heavily in the African slave trade.

All content from Kiddle encyclopedia articles (including the article images and facts) can be freely used under Attribution-ShareAlike license, unless stated otherwise. Cite this article:
Bight of Benin Facts for Kids. Kiddle Encyclopedia.