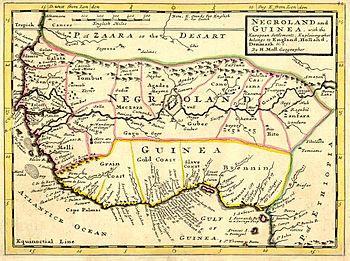 The Slave Coast is the name of the coastal areas of present Togo, Benin (formerly Dahomey) and western Nigeria. This is a fertile region of coastal Western Africa along the Bight of Benin. In pre-colonial times it was one of the most densely populated parts of the African continent. It was one of the most important places for the Atlantic slave trade from the early 16th century to the 19th century.

The slave trade became so large in the 18th and 19th centuries that an “Atlantic community” was formed. Slaves went to the New World, mostly to Brazil and the Caribbean. Ports that exported these slaves from Africa include Ouidah, Lagos, Aného (Little Popo), Grand-Popo, Agoué, Jakin, Porto-Novo, and Badagry.

Researchers think that between 2 and 3 million slaves were exported out of this region. They were traded for goods like alcohol and tobacco from the Americas and textiles from Europe. Religions, architectural styles, languages, knowledge, and other new goods were mixed at this time.

After slavery was ended by European countries, the slave trade continued for a time with independent traders (instead of government agents).

All content from Kiddle encyclopedia articles (including the article images and facts) can be freely used under Attribution-ShareAlike license, unless stated otherwise. Cite this article:
Slave Coast Facts for Kids. Kiddle Encyclopedia.