The Niger River is the main river of western Africa. It is over 4180 km (2500 miles) long. It has a crescent shape and it goes through Guinea, Mali, Niger, on the border with Benin and then through Nigeria. Finally, it reaches the sea at a large delta, called the Niger Delta of the Oil Rivers. This part of the Atlantic Ocean is called the Gulf of Guinea. The Niger is the third-longest river in Africa. Only by the Nile and the Congo are longer. Its main tributary is the Benue River. 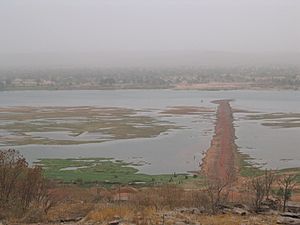 No-one knows the origin of the name Niger. Many people think that it comes from the Latin word for "black", niger, but there is no evidence for this, and Portuguese explorers would probably have used their own word (negro) on their maps. Also, the Niger is not a blackwater river (see Rio Negro). Some people think that 'black' may mean the color of the people in this area, but this did not happen with any other river in Africa.

The Tabula Peutingeriana says "Flumen Girin" (River Girin) and "Hoc flumen quidam Grin vocant, alii Nilum appellant dicint enim sub terra Etyopium in Nilum ire Lacum.", which means "This river which some are naming Grin is called Nile by others and is thought to flow under the ground of Ethiopia (i.e. modern Africa) into the Nile Lake."

Nigeria and Niger take their names from the river. The people who live beside the river have many names for it, such as Jeliba or Joliba ("great river" in Manding), Isa Ber ("big river" in Songhay), Oya, (a Yoruba River Niger goddess), and Kworra or Quorra. The last name was the name that Europeans used for the lower part of the river before they knew that the upper and lower parts were connected. 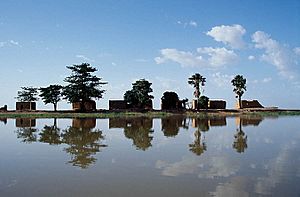 Mud houses on the island in Lake Debo, a wide section of the Niger River

The Niger River is quite a clear river. It has only 10% as much sediment as the Nile because the Niger's source is in very old rocks that have little silt. Like the Nile, the Niger River has a flood every year; this starts in September, becomes strongest in November, and finishes by May.

An unusual feature of the river is the Niger Inland Delta. This forms where the river suddenly becomes less steep. This makes a region of connected streams, marshes, and lakes over an amount of land the same size as Belgium. The yearly floods make the delta very good for fishing and farming.

The Niger takes an unusual route. It is a boomerang shape and this confused Europeans for 2000 years. Its source is only 240 km (150 miles) from the Atlantic Ocean, but the river flows away from the sea into the Sahara Desert, then turns near the ancient city of Timbuktu (Tombouctou). From here, it goes southeast to the Gulf of Guinea.

Ancient Romans thought that the river near Timbuktu was part of the Nile River and Ibn Battuta had the same opinion. Early 17th-century European explorers thought that it flowed west and joined the Sénégal River. Many local people probably knew the real route, but Europeans only knew it in the late 19th century, when it was mentioned in the book Travels in the Interior of Africa by the Scottish explorer Mungo Park. This unusual route happened because the Niger River is two ancient rivers which are joined together. The upper Niger, from the source, past Timbuktu, to the bend in the river, used to empty into a lake, but the lake has now gone. However, the lower Niger started in hills near the lake and flowed south into the Gulf of Guinea. The Sahara Desert dried up in 4000-1000 BC, and the two rivers changed their routes and they joined (some people disagree, but most people think this is true).

The northern part of the river, which is called the Niger bend, is important because it is the Sahara Desert's closest big river. Therefore, trade across the west of the Sahara came here, and it became the center of the Sahelian kingdoms of Mali and Gao.

All content from Kiddle encyclopedia articles (including the article images and facts) can be freely used under Attribution-ShareAlike license, unless stated otherwise. Cite this article:
Niger River Facts for Kids. Kiddle Encyclopedia.