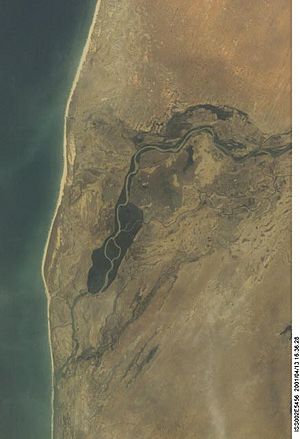 The Sénégal River is a river in West Africa. It is 1793 km long and is the border between Senegal and Mauritania. Pliny the Elder called it Bambotus (from a word meaning "hippopotamus") and Claudius Ptolemy called it Nias. Hanno the Carthaginian went to the river in about 450 BC when he was going from Carthage to Mount Cameroon in the Gulf of Guinea. Carthage was destroyed in 146 BC, but before that time there was probably trade from here to the Mediterranean Sea.

Near the river's mouth, the Sénégal goes through Biffeche and there is an island in the river. The city of Saint-Louis is on this island. The river then turns south. There is a thin line of sand and this separates the river from the Atlantic Ocean. The line of sand is called the Langue de Barbarie. After this, the river enters the Atlantic Ocean. The river has two large dams: the Manantali Dam in Mali, and the Maka-Diama Dam on the Mauritania-Senegal border, near the sea. The Manantali Dam makes a reservoir. The Maka-Diama Dam stops salt water going deep into the countryside.

The Sénégal River takes its water from 483,181 km² of land. About 8 000 000 km³ of water goes along the river every year. The Faleme River, Karakoro River, and Gorgol River join the Sénégal River.

In 1972, Mali, Mauritania and Senegal made the Organisation pour la mise en valeur du fleuve Sénégal (OMVS). This organisation manages the land around the river. Guinea joined this organisation in 2005.

All content from Kiddle encyclopedia articles (including the article images and facts) can be freely used under Attribution-ShareAlike license, unless stated otherwise. Cite this article:
Sénégal River Facts for Kids. Kiddle Encyclopedia.