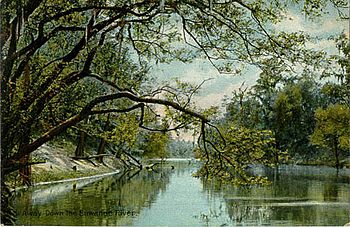 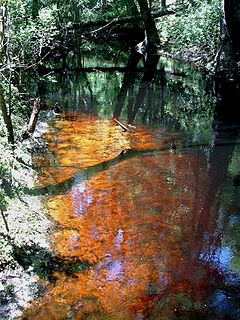 A blackwater river is a river with a deep, slow-moving channel flowing through forested swamps or wetlands. Its colour is caused by the decaying vegetation. As vegetation decays, tannins leach into the water, making a transparent, acidic water that is darkly stained, looking like tea or coffee.

Blackwater rivers are lower in nutrients than whitewater rivers and have ionic concentrations higher than rainwater. The unique conditions lead to flora and fauna that differ both from whitewater and clearwater rivers.

The classification of Amazonian rivers into black, clear and whitewater was first proposed by Alfred Russel Wallace in 1853.

All content from Kiddle encyclopedia articles (including the article images and facts) can be freely used under Attribution-ShareAlike license, unless stated otherwise. Cite this article:
Blackwater river Facts for Kids. Kiddle Encyclopedia.