The Tahquamenon Falls are two different waterfalls on the Tahquamenon River. Both sets are located near Lake Superior in the eastern Upper Peninsula of Michigan. The water is notably brown in color from the tannins leached from the cedar swamps which the river drains. The upper falls are more than 200 feet (60 m) across and with a drop of approximately 48 feet (14 m) During the late spring runoff, the river drains as much as 50,000 US gallons (190,000 L) of water per second, making the upper falls the third most voluminous vertical waterfall east of the Mississippi River, after Niagara Falls and Cohoes Falls, both in New York State. 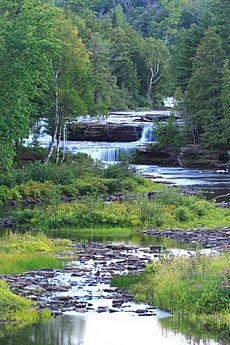 The lower falls, located four miles (6.5 km) downstream, are a series of five smaller falls cascading around an island which can be reached by rowboat. A hiking trail runs between the falls along the riverside, and visitors often play in the lower falls during the summer heat.

The falls are within Tahquamenon Falls State Park, between Newberry, Michigan, and Paradise, Michigan. They are a popular tourist destination in the Upper Peninsula during all seasons. Snowmobile trails lead almost to the falls, and walkways are kept clear for most of the winter.

The Tahquamenon is noted as being the land of Longfellow's The Song of Hiawatha - "by the rushing Tahquamenaw" where Hiawatha built his canoe. "Tahquamenon Falls" is also a song from Sufjan Stevens's album Michigan.

While the name Tahquamenon is now primarily associated with the falls, it appears to have originally designated an island in Whitefish Bay: Tahquamenon Island. The first written record of the name appears as "Outakouaminan" in a 1671 French map.[1]

Panoramic view of the Tahquamemon Falls.

All content from Kiddle encyclopedia articles (including the article images and facts) can be freely used under Attribution-ShareAlike license, unless stated otherwise. Cite this article:
Tahquamenon Falls Facts for Kids. Kiddle Encyclopedia.