The District of Gungahlin is one of the original eighteen districts of the Australian Capital Territory used in land administration. The Gungahlin Region is one of fastest growing regions within Australia. The district is subdivided into divisions (suburbs), sections and blocks. Gungahlin is an Aboriginal word meaning either "white man's house" or "little rocky hill".

As of 2013[update] Gungahlin comprised eleven suburbs, including three currently under construction and a further seven suburbs planned. The town of Gungahlin was part of the original 1957 plan for future development in the ACT and in 1991 was officially launched as Canberra's fourth 'town' by the ACT Chief Minister. At the time, the population of Gungahlin was just 389 residents. According to the 2016 census, the population of the district was 70,871, an increase from 46,971 in the 2011 census. This figure was expected to rise to 83,167 by the year 2020.

Within the district is Canberra's northernmost town centre that is situated 10 kilometres (6.2 mi) north of Canberra city centre. The town centre is one of five satellites of Canberra, seated in Woden, Tuggeranong, Weston Creek and Belconnen.

The traditional custodians of the district are the indigenous people of the Ngunawal tribe.

Following the transfer of land from the Government of New South Wales to the Commonwealth Government in 1911, the district was established in 1966 by the Commonwealth via the gazettal of the Districts Ordinance 1966 No. 5 (Cth) which, after the enactment of the , became the . This Act was subsequently repealed by the ACT Government and the district is now administered subject to the .

During colonial times and up until the late 1960s, present-day Gungahlin was part of the former farmlands of Ginninderra. Ginninderra Village and later still the village of Hall serviced the needs of the local farming community. Free settlers included farming families such as the Rolfe, Shumack, Gillespie and Gribble families. These settlers established wheat and sheep properties such as 'Weetangara', 'Gold Creek', 'The Valley', 'Horse Park' and 'Tea Gardens'. Much of the local produce supplied the large workforce at goldfields located at Braidwood and Major's Creek in New South Wales.

The district is a set of contiguous residential and industrial suburbs that surround a town centre, together with undeveloped pastoral leases that border with the state of New South Wales to the north, north-east and east. The suburbs are divided from the surrounding districts of Belconnen to the west and south-west, Canberra Central to the south, Majura to the south-east, and Hall to the north-west.

The main industrial suburb of the district is Mitchell.

Asterisk indicates undeveloped suburbs as of 2016. 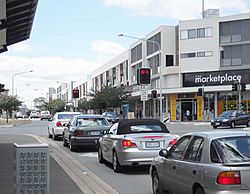 The primary mode of transport within the district is by private vehicle. Despite continued discussion about the preference for sustainable public transport especially light rail, Gungahlin's development is still guided by a philosophy of reliance on private personal transport and an extensive road network.

The ACTION bus service provides public transport throughout Canberra. Services from the various suburbs generally pass through a bus interchange located at the Gungahlin Town Centre from where they connect with light rail to Civic. Some services operate direct to the Belconnen Town Centre. The Gungahlin bus interchange is located in Hibberson Street.

A light rail network linking the Gungahlin Town Centre to Civic opened in April 2019. It is intended to address peak-hour congestion on Northbourne Avenue by encouraging public transport use.

Private transport is the dominant mode of transport for Gungahlin commuters. The district's major arterial roads to North Canberra and the city centre are Northbourne Avenue via the Barton Highway, Horse Park Drive and Flemington Road. Gundaroo Drive-William Slim Drive is the main connection to the district of Belconnen. With the completion of the Gungahlin Drive Extension in 2008, Gungahlin commuters can bypass the city centre to reach city's southern suburbs via Gungahlin Drive and onto William Hovell Drive and the Tuggeranong Parkway.

A number of projects have improved road access to the Gungahlin district including: 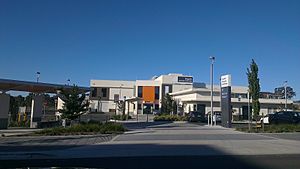 While the Gungahlin district is serviced by Calvary Hospital and The Canberra Hospital for emergency treatment, a number of private medical practices have established in the town centre and surrounding suburbs. The ACT Government Health Directorate also operates a Community Health Centre, providing access to allied health and outpatient services including mental health services, children's dental and nutrition, diabetes clinic, pathology collection and drug and alcohol counseling services. The clinic opened on 3 September 2012.

The Gungahlin Community Council is the peak community representative organisation for the district.

All content from Kiddle encyclopedia articles (including the article images and facts) can be freely used under Attribution-ShareAlike license, unless stated otherwise. Cite this article:
Gungahlin Facts for Kids. Kiddle Encyclopedia.