The Chattahoochee RiverWalk is a 22-mile walking and biking area along the Chattahoochee River in Columbus, Georgia, United States. The trail is paved with asphalt, concrete, or brick. Due to the RiverWalk bike path, Columbus has been listed by the League of American Bicyclists as one of the forty most Bicycle Friendly Communities in the United States. 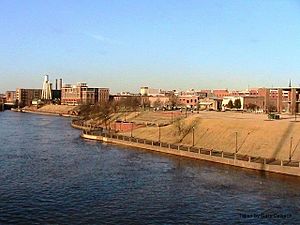 The Chattahoochee Riverwalk from the Dillingham Street Bridge

In 1989 construction began on the first phase of RiverWalk. The project opened for use on October 12, 1992 (Columbus Day). A statue of Christopher Columbus was installed on the RiverWalk near the Dillingham Street bridge.

The second phase of the RiverWalk extended it from the Columbus Convention and Trade Center in Downtown to Oxbow Meadows in South Columbus. Before expanding the North end of the RiverWalk, the city extended the path to the Infantry Center at Fort Benning.

The RiverWalk begins in North Columbus at Lake Oliver and extends southward twenty-two miles to Fort Benning. It is divided into three areas:

There are eleven designated access points. With expansion there is a more continuous way for people who want to go to Fort Benning from Lake Oliver Marina. There are two sections of the RiverWalk to be completed: the City Mills site and the Bibb Mill site. The 14th Street bridge is also slated for major renovations to be completed in 2011.

South of the Columbus Civic Center on the RiverWalk, there are signs warning that the area is an Alligator Habitat.

The City of Columbus Visitor Center partnered with Groundspeak to emplace a GeoTour along the Riverwalk to attract geocachers. The GeoTour highlights 31 locations important to the history of the city.

All content from Kiddle encyclopedia articles (including the article images and facts) can be freely used under Attribution-ShareAlike license, unless stated otherwise. Cite this article:
Chattahoochee RiverWalk Facts for Kids. Kiddle Encyclopedia.