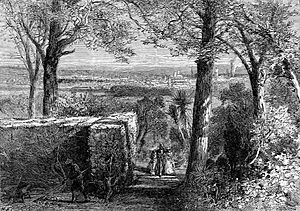 View of Augusta, from Summerville, 1872, by Harry Fenn; Augusta annexed Summerville in 1982

Augusta, Georgia was founded in 1735 as part of the British colony of Georgia, under the supervision of colony founder James Oglethorpe. It was the colony's second established town, after Savannah. Today, Augusta is the third-largest city in Georgia, and the largest city of the Central Savannah River Area. 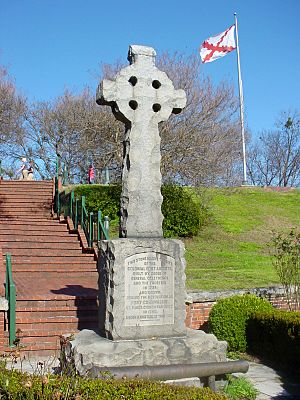 Augusta, Georgia was first used by Native Americans as a place to cross the Savannah River, because of Augusta's location on the fall line.

In 1736 , two years after James Oglethorpe founded Savannah, he sent a detachment of troops on a journey up the Savannah River. He gave them an order to build at the head of the navigable part of the river. The job fell into the hands of Noble Jones, who created the settlement to provide a first line of defense against the Spanish and the French. Oglethorpe then named the town Augusta, in honor of Princess Augusta, wife of Frederick, Prince of Wales.

The town was laid out on the flat slopes of the Savannah River, just east of the sand hills that would come to be known as Summerville. The townspeople got along peacefully most of the time with the surrounding tribes of Chickasaw, Creek, Yuchi and Shawnee Indians. The Shawnees in the region were known as the Savano Indians. The name of the Savannah River is an Anglicization of their tribal name.

In 1739, construction began on a road to connect Augusta to Savannah. This made it possible for people to reach Augusta by horse, rather than by boat, and more people began to migrate inland to Augusta. Later, in 1750, Augusta's first church, Saint Paul's, was built near Fort Augusta. It became the leader of the local parish.

The town's relationship with the neighboring Cherokee who traded with Augusta was not as good as its relationships with other tribes. During the Anglo-Cherokee War their war parties came close to Augusta and were repulsed by the Creek.

While slavery was originally banned in the colony by James Oglethorpe, it soon became an integral part of Georgia's history. Under Georgia's new constitution, a new political structure was laid out in 1777; Augusta's parish government was replaced by a county government, Richmond County, named after the Duke of Richmond.

American Revolution to the Civil War 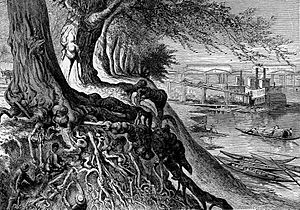 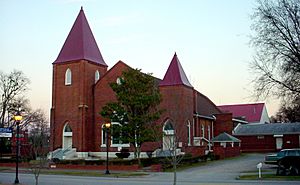 Springfield Baptist Church, 1867-1879 site of the Augusta Institute. In 1879 the Institute moved to Atlanta, and in 1913 became known as Morehouse College.

During the American Revolution, Savannah fell to the British. This left Augusta as the new state capital and a new prime target of the British. By January 31, 1779, Augusta was captured by Lt. Col. Archibald Campbell. But Campbell soon withdrew, as American troops were gathering on the opposite shore of the Savannah River. Augusta again became the state capital, but not for long. Augusta fell into British hands once more before the end of the war.

From then until the American Civil War, with the establishment of the Augusta Canal, Augusta became a leader in the production of textiles, gunpowder, and paper. The Georgia Railroad was built by local contractors Fannin, Grant & Co in 1845, giving Augusta a rail link to Atlanta. The railroad connected to the Tennessee River at Chattanooga, Tennessee, thus providing access from inland Georgia to the Mississippi River. The cost-savings of this link from the middle of the country to the Atlantic Ocean via the Savannah River increased trade considerably. 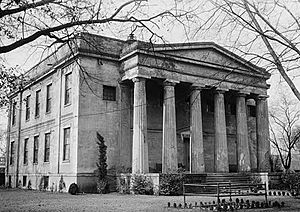 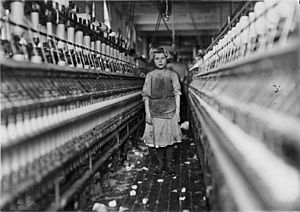 Originally, Augustans welcomed the idea of the Civil War. The new Confederate Powderworks were the only permanent structures constructed and completed by the Confederacy. Over 2000 Augustans went away to fight in the war, but war did not set into the minds of Augustans until the summer of 1863. It was in that year that thousands of refugees from areas threatened by invasion came crowding into Augusta, leading to shortages in housing and provisions. Next came the threatening nearness of General Sherman's advancing army, causing panic in the streets of the once-quiet town. However, the city was never burned to the ground. After the War, Augusta and Georgia were both under martial law during the period known as Reconstruction. During this time, African American civil rights were expanded. Following the end of Reconstruction, the European American majority population of Georgia and other Southern U.S. states enacted Jim Crow laws to limit the rights of African Americans. These restrictions would not be lifted until the Civil Rights Movement of the mid-20th century.

Unlike most Southern cities, Postbellum life for Augusta was very prosperous. By the beginning of the 20th century, Augusta had become one of the largest inland cotton markets in the world. A new military cantonment, named Camp Hancock, opened nearby during World War I. In 1916 a large fire destroyed over 700 buildings in the city including many of its finest residences.

In 1927, Owen Robertson Cheatham founded the lumber company Georgia Pacific in Augusta, before it moved to Portland, Oregon, and later to Atlanta.

Prior to World War II, the U.S. Army constructed a new fort in Richmond County, Camp Gordon, which was finished a few days after the attack on Pearl Harbor. Many new soldiers were brought to this camp to train to go off to war. Within the few months after WWII, many of the GIs at Camp Gordon had been sent back home, and the importance of the army in the community seemed to almost come to an end. Music legend James Brown, then a teenager, often performed for the soldiers. Brown grew up in Augusta during the 1930s and 1940s.

In 1948, new life came to the city when the U.S. Army moved the Signal Training Center and Military Police School to Camp Gordon. Later, in November 1948, the Clarks Hill Reservoir was created by a newly constructed dam, which provided the city with a supply of hydroelectric power. In 1950, plans were announced to build the Savannah River Plant nearby, which would boost the city's population about 50,000. Augusta moved into the second half of the twentieth century on the threshold of becoming an urban industrial center in the South. E-Z-GO and Club Car, the two largest golf car manufacturers in the world, are centered in Augusta, and the Norfolk Southern and CSX run through the middle of downtown Augusta. The city is also a large private company hot-spot, home to the Georgia Bank & Trust and CareSouth.

The Civil Rights Movement touched Augusta as it did the rest of the United States. In 1961, soul musician Ray Charles canceled a scheduled performance at the Bell Auditorium when he learned that the black attendees would be segregated from the whites and forced to sit in the balcony. A few days after the Kent State shootings and Jackson State killings in May 1970, six African-American students were killed after they were shot in the back for looting by police following civil rights demonstrations. Racial tensions flared into a full blown riot with many buildings being set on fire. Today, African Americans constitute 53.6 percent (2006 estimate) of the population of Augusta-Richmond County. While slavery and Jim Crow are but memories of the past, race relations continue to be contentious in city politics.

Beginning in the late 1970s, businesses started leaving downtown Augusta for both Regency Mall and Augusta Mall. That started a trend of urban abandonment and decay. To counter this trend, city politicians and business leaders promoted revitalizing Augusta's hidden riverfront (obscured by a levee) into Riverwalk Augusta, with parks, an amphitheater, hotels, museums, and art galleries. The first segment of Riverwalk Augusta was opened in the late 1980s and later expanded in the early 1990s. However, the renaissance of the riverfront did not appear to be spilling over into Augusta's main street, Broad Street, as more businesses were leaving and more storefronts boarded up. Broad Street is the second widest Broad street in America.

In 1995, members of the art community and downtown boosters started a monthly event called First Friday. It was a night festival whose aim was to bring crowds back to downtown. It featured local bands, street performers, and art galleries with extended evening hours. Since 1995, more businesses have returned to downtown, including many new restaurants and bars. A block of upper Broad Street has been named Artists' Row and is home to several locally owned art galleries. First Friday still continues today in addition to many revitalization efforts to downtown. Enterprise Mill was recently renovated to include business offices and apartments. 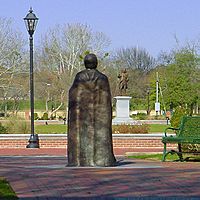 The Augusta Museum of History highlights Augusta's history and famous natives and Historic Augusta has helped preserve architecturally important sites throughout the city. Plans for redeveloping downtown Augusta include new hotels and condos next to Riverwalk Augusta.

All content from Kiddle encyclopedia articles (including the article images and facts) can be freely used under Attribution-ShareAlike license, unless stated otherwise. Cite this article:
History of Augusta, Georgia Facts for Kids. Kiddle Encyclopedia.