Kids Encyclopedia Facts
This page is about the truck stop. For the article about the highway in Iowa along which it is located, see Interstate 80 in Iowa. 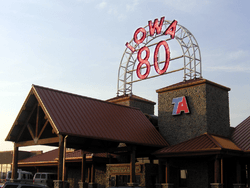 The facility features separate entrances for truckers and regular commuters.

Iowa 80 is the world's largest truck stop, located along Interstate 80 off exit 284 in Walcott, Iowa. Set on a 220-acre (89 ha) plot of land (four times larger than an average truckstop)—75 acres (30 ha) of which are currently developed—the site receives 5,000 visitors daily, and features a 67,000 sq ft (6,200 m2) main building, parking for 900 trucks, and 15 diesel fuel pumps, and also having another dedicated pump for dispensing bulk diesel exhaust fluid. Four-hundred and fifty employees staff the megaplex.

Iowa 80 is currently affiliated with the TravelCenters of America chain.

Bill Moon, a regional manager for Standard Oil, purchased the land and built the original truckstop in 1964 along the emerging I-80, the 3,000-mile (4,800 km) highway that would directly connect San Francisco with New York. "As they were building I-80, my father was responsible for finding land and building truck stops for Standard," says his daughter Delia Meier. Initially a small white enamel building surrounded by cornfields, it housed a modest truckers' store, one lube bay and a restaurant. Bill Moon took direct control in September 1965 and eventually purchased the site from the corporation in 1984. In 1992, the year of Moon's death, it became a Travelcenter of America franchise, though the facility is still owned and operated by the Moon family. In addition, the Iowa 80 Group also owns the Joplin (MO) Petro on Interstate 44, Oak Grove (MO) 70 off Interstate 70 just outside Kansas City, and Kenly (NC) 95 off of Interstate 95.

Iowa 80 has a large truck parking lot, truck scales, and fueling stations as is customary for a truck stop. There are fifteen fuel stations. The stations have nozzles on each side, so tanks on both sides of the truck can be filled simultaneously. Since the introduction of trucks requiring diesel exhaust fluid, the fuel island at Iowa 80 has been renovated to include pumps for bulk DEF dispensing. Iowa 80 has a service center where vehicle diagnostics, minor repairs, oil changes or tire rotations can be done. A small convenience store is located on the fuel island. Iowa 80 also has a truck washing facility, and even the engine can be washed.

The showroom floor, featuring tricked-out 'show tractors' and a wall of lights.

The Iowa 80 facility also has a two-story, 30,000 sq ft (2,800 m2) showroom, which is the largest trucker's store in the country. Here customers may purchase chrome accessories, books, DVDs, CDs, cell phone accessories, CB radio equipment, apparel and cleaners, chrome stacks, and bumpers. There are custom built show trucks, one on a rotating platform. A 20-by-40-foot (6.1 m × 12.2 m) wall displays 500 illuminated truck lights. Also located in the store are a vinyl graphics shop, a custom T-shirt shop, and an embroidery center.

A number of food services are located at the stop. These include Blimpie, Wendy's, Caribou Coffee, Dairy Queen, Orange Julius, Taco Bell, Einstein Bros. Bagels, and Pizza Hut. The Iowa 80 Kitchen has an extensive salad bar and provides 'home-cooked' meals. The Iowa 80 Kitchen serves 1 million cups of coffee and 90 tons of meat annually. The restaurant seats 350 patrons, and a banquet room expands the total capacity by 60.

There are twenty-four private shower and toilet rooms (which may be requested at the fuel pump), a game room, and a Driver's Den Lounge. The lounge provides leather chairs and a fireplace for relaxing. Iowa 80 also features a business center with fax machines, logbooks & trip report forms and working stations. A 60-seat movie theater and an on-site barbershop are available.

The most unexpected facilities, though, may be the dentist's office and the chiropractic clinic. The dentist usually arrives at around 9am; some of his patrons are local residents rather than truckers. In the Modern Marvels episode "Truck Stops" on the History Channel, the dentist states that he is sometimes the "truckers best friend" because he is providing treatment that is usually aimed at "taking them (the drivers) out of pain". According to the dentist interviewed for the episode, the dentist office in Iowa 80 is very beneficial because it provides a service to patients that might not otherwise get to visit a dentist due to the nomadic lifestyle that over-the-road truck drivers lead. The dentist's office in Iowa 80 accepts both private pay and most all of the major dental insurance plans offered to drivers by companies, making its services accessible to a much wider range of clients.

Across the hall from the dentist is a recently added chiropractic clinic. Services include chiropractic adjustments and Department of Transportation physicals.

All content from Kiddle encyclopedia articles (including the article images and facts) can be freely used under Attribution-ShareAlike license, unless stated otherwise. Cite this article:
Iowa 80 Facts for Kids. Kiddle Encyclopedia.