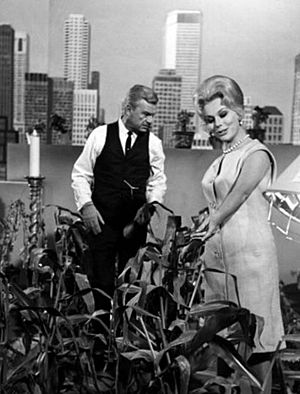 Publicity photo for the premiere of the show

Green Acres is an American sitcom starring Eddie Albert and Eva Gabor. It is about a couple who move from New York City to a rural country farm. Produced by Filmways as a sister show to Petticoat Junction. The series was first broadcast on CBS, from September 15, 1965 to April 27, 1971.

All content from Kiddle encyclopedia articles (including the article images and facts) can be freely used under Attribution-ShareAlike license, unless stated otherwise. Cite this article:
Green Acres Facts for Kids. Kiddle Encyclopedia.