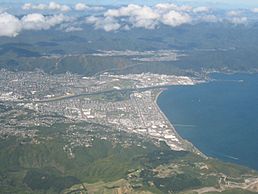 Lower Hutt from the air, looking eastwards in March 2009.

Lower Hutt (Māori: Awakairangi) is a city in the Wellington Region of the North Island of New Zealand. It is administered by the Hutt City Council and is one of the four cities that constitute the Wellington metropolitan area.

It is New Zealand's seventh most populous city, with a population of 103,400. The city covers an area of 377 km2 (146 sq mi) around the lower half of the Hutt Valley and the eastern shores of Wellington Harbour. It is separated from Wellington proper by the harbour, and from Upper Hutt by the Taitā Gorge.

Before European settlement, thick forest covered most of the Hutt Valley, with areas of marshland close to the river's mouth. Māori inhabited the shoreline, with a pa at each end of Petone beach.

The local Māori welcomed the arrival of the New Zealand Company ship Tory in 1839, and William Wakefield (the company's agent) negotiated with local chiefs to allow settlement. The first immigrant ship, the Aurora, arrived on 22 January 1840, still celebrated every year on the Monday closest as Wellington's Anniversary Day. A settlement, Britannia, grew up close to the mouth of the Hutt River, and settlers set up the infant country's first newspaper and bank.

The city takes its name from the river, named after the founding member, director and chairman of the New Zealand Company, Sir William Hutt. 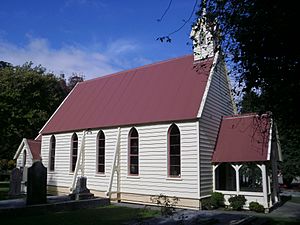 Christ Church, Taitā, built in 1853 is the oldest church in the Wellington region.

Within months of settlement the river flooded, and in March 1840 the majority of Britannia settlers decided to move to Thorndon, (as of 2013[update] in the heart of Wellington city), though some settlers remained at the north end of the harbour. In the 1840s an area on the west bank of the Hutt River formed the village then known as Aglionby.

In 1846 conflict arose between settlers and Māori, which led to skirmishes in the Hutt Valley Campaign.

The 1855 Wairarapa earthquake (in the range 8.1–8.3) raised part of the lower valley, allowing reclamation of land from swamp. The fault escarpment from the earthquake is still visible, notably at Hutt Central School.

On New Year's Day 1859 the first permanent lighthouse to be built in New Zealand was lit at Pencarrow Head, and was home to New Zealand's only female lighthouse keeper, Mary Jane Bennett, was the inaugural operator of the lighthouse.

The railway line from central Wellington reached Lower Hutt station (now Western Hutt) in April 1874, with the line travelling north up the west side of the river to Silverstream opening two years later.

Before the Second World War, urban settlement in the lower Hutt Valley concentrated mainly on Petone, central Lower Hutt and Eastbourne, with a total population of 30,000. In 1927 the Public Works Department completed the construction of a branch railway line to Waterloo on the east side of the river; the route diverging from the main line between Lower Hutt and Petone. Two years later the railway workshops moved from Petone to a new larger site off the new branch at Woburn.

In the late 1940s new suburbs of state housing developed along the eastern side of the Hutt Valley, from Waiwhetu to Taita, to alleviate nationwide housing shortages and to cater for the booming population. Between 1946 and 1954, the railway line from Waterloo was extended through these new suburbs to Haywards, becoming the main line in 1954 when the existing main line was closed between Haywards and Melling. By the end of the 1950s, Lower Hutt had a population of 80,000.

The city centres on the lower (southern) valley of the Hutt River, to the northeast of Wellington. The valley widens as the river nears its mouth, so the central urban area of the city forms a triangle with its longest side along the shoreline. In the upper reaches of the city the Western and Eastern Hutt Hills become closer, culminating in the Taitā Gorge at the northern end of Lower Hutt, separating the city from neighbouring Upper Hutt.

Lower Hutt includes the cluster of small settlements that extend down the eastern coast of Wellington Harbour. These include the two large townships of Wainuiomata (inland) and Eastbourne (on the coast). The city also includes a large area of sparsely-populated land to the east of the harbour, extending to Pencarrow Head and into the Rimutaka Ranges.

Lower Hutt's boundaries include the islands in Wellington Harbour, the largest of which, Matiu/Somes Island, is commonly referred to by its former name of Somes Island.

Lower Hutt has a humid climate with relatively warm summers and mild winters with the occasional storm.

A single major aquifer dominates the lower Hutt Valley: the Hutt River, originally named Heretaunga and as of 2016[update] known as Awakairangi / Hutt River. Awakairangi in the Maori language means "river of food from the sky".

Lower Hutt occupies the lower regions of the flood plain of the river, one of the most significant features to contain the river, but the threat of flooding from heavy rainfall persists. In 1985 the river burst its banks, and since then floods have been on a smaller scale. Smaller streams and storm-water drains have also caused occasional problems when rainfall exceeds average levels.

Much of the land adjacent to the river is protected as reserve and provides popular recreational areas, with walking and cycling trails and grassed areas at various points along both sides of the river up the Hutt Valley.

With lower river levels in mid-summer, algal blooms have contributed to making slow-flowing areas anoxic. The algal blooms have been attributed as the cause of death of a small number of dogs swimming in the river, as well as of skin reactions in the case of swimmers.

The river is crossed by seven bridges within the city, and has seen many times that number built and replaced since the 1850s.

Tributaries of the Hutt River within Lower Hutt include:

Suburbs of Lower Hutt include the following – listed approximately north to south. (Those in italics are unofficial suburbs.)

Several education and research facilities of national significance are in the southern half of the city. Cultural facilities include the Dowse Art Museum and the Avalon film and television studios

The city possesses civic administration buildings constructed in the 1950s that are regarded as representative architecture of the era. A building of national significance is Vogel House, a two-storey wooden residence that was the official residence of the Prime Minister of New Zealand for much of the 20th century. It is a prime example of early colonial architecture in New Zealand and operates today as a tourist attraction.

Among the filming locations for The Lord of the Rings (film series) directed by Peter Jackson, Dry Creek quarry, which dominates the hills above the suburb of Taitā, became the site for a huge medieval castle built for scenes of Helm's Deep and Minas Tirith.

Hills to about 350 m (1000 ft) line both sides of the valley within the city limits. The western hills have been populated as residential areas, but the eastern side is protected and clad in native bush and scrub, and the ubiquitous gorse in areas that have been cleared as a result of scrub fires or earlier human activity.

Lower Hutt from Normandale, in the western hills. On the right is the entrance to Wellington Harbour, with Matiu/Somes Island beneath. The Hutt River snakes from the right background to the left mid-ground, entering the harbour between the suburbs of Seaview and Petone. The Wainuiomata Hill Road climbs the hills in the centre background (the track in the middle of the left half of the background is a firebreak, not a road). At the foot of the Wainuiomata Hill Road is the Gracefield industrial area.

Wider view of the Lower Hutt valley. This view shows Wellington in the distance on the extreme right hand side. Past the Lower Hutt CBD in the centre of the photo, and onto Avalon and Taitā on the left-hand side.

Wellington Harbour and southern Lower Hutt from the top of the Wainuiomata Hill Road (south of the above photo), looking west. Matiu/Somes Island is in the harbour on the left (South), and beyond that the row of lights along State Highway 2, marking the line of the geologic fault, both of which continue up the far side of the valley to the right. The industrial area in the central foreground is Gracefield. In the distance, behind Matiu/Somes Island, are Wellington port and CBD.

All content from Kiddle encyclopedia articles (including the article images and facts) can be freely used under Attribution-ShareAlike license, unless stated otherwise. Cite this article:
Lower Hutt Facts for Kids. Kiddle Encyclopedia.