The blackbird (Turdus merula, or common blackbird) is a thrush. It is a member of the passerine songbird family Turdidae.

It has a huge range across Europe, Asia, and North Africa, and has been introduced to Australia and New Zealand. It has a number of subspecies across its range. Depending on latitude, the common blackbird may be resident, partially migratory or fully migratory.

The adult male is black, with a yellow/orange bill (beak). Juveniles and females are brown, and less easy to see. Blackbirds are easy to find in gardens all over Europe and in Asia, South of the Arctic Circle. On average, Blackbirds live to be 2.4 years old, but some have been found to be 20 years old. 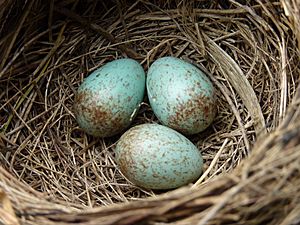 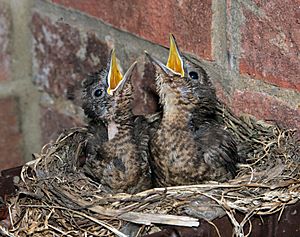 Two chicks in a nest

It is a terrific singer, and will breed whenever the weather is right.

The male common blackbird defends its breeding territory, chasing away other males or using a "bow and run" threat display. This is a short run, the head first being raised and then bowed with the tail dipped simultaneously. If a fight between male Blackbirds does occur, it is usually short and the intruder is soon chased away.

The female blackbird is also aggressive in the spring when it competes with other females for a good nesting territory, and although fights are less frequent, they tend to be more violent.

The male attracts the female with a courtship display: oblique runs and head-bowing movements, an open beak, and a "strangled" low song. The female stays still until she raises her head and tail to allow sex. This species is monogamous, and the established pair usually stay together as long as they both survive. Pair separation rates of up to 20% have been noted following poor breeding. Although socially monogamous, there have been studies showing as much as 17% extra pair paternity.

As long as winter food is available, both the male and female will stay in the territory throughout the year, although occupying different areas. Migrants are more social, travelling in small flocks and feeding in loose groups in the wintering grounds. The flight of migrating birds is bursts of rapid wing beats interspersed with level or diving movement, and differs from both the normal fast agile flight of this species and the more dipping action of larger thrushes.

All content from Kiddle encyclopedia articles (including the article images and facts) can be freely used under Attribution-ShareAlike license, unless stated otherwise. Cite this article:
Blackbird Facts for Kids. Kiddle Encyclopedia.