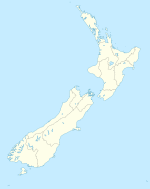 Eastbourne is a suburb of Lower Hutt city in the southern North Island of New Zealand. Its population is about 4,600. 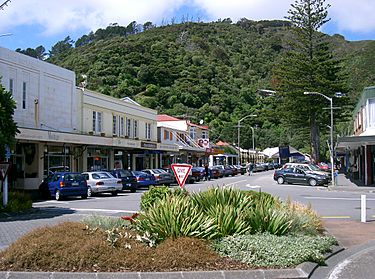 Rimu Street is the main street of Eastbourne.

An outer suburb, it is situated on the eastern shore of Wellington Harbour, five kilometres south of the main Lower Hutt urban area and directly across the harbour from the Miramar Peninsula in Wellington city. It is reached from Lower Hutt by a narrow exposed coastal road via the industrial suburb of Seaview. It comprises some 2000 residential homes spread over the seven main small bays of Point Howard, Lowry Bay, York Bay, Mahina Bay, Days Bay, Rona Bay and Robinsons Bay, although only the last two are commonly considered part of Eastbourne itself. There are also two smaller bays; Sunshine Bay and Sorrento Bay.

Close to the sea and catching afternoon sun, the bays are quite steep with the lower reaches having homes, many with spectacular harbour views. Higher up there is mainly native bush and trees. With a locally administered possum eradication programme much of the native bush has regenerated including some magnificent red flowering northern rātā trees. The bush has numerous tracks running to and from them including a track along the entire bays hills ridge. It also has sheltered swimming beaches that are a major attraction. Eastbourne is also a popular windsurfing and kitesurfing location due to Wellington’s frequently windy weather.

There is a regular trans-harbour ferry service between Wellington and Eastbourne, which docks at the Days Bay wharf in Eastbourne and at Queen's Wharf close to down-town Wellington.

Prior to its amalgamation into Lower Hutt, the Borough of Eastbourne was a separate town, with its own council and civic administration. The Eastbourne Community Board is a remnant of the town council and remains vocal on local issues. After much unhappiness with the council and community board an independent group calling itself "Eastbourne Rights" was set up and one of its first issues was to promote the secession from Lower Hutt and amalgamation with Wellington City Council.

At the end of Eastbourne beyond Burdan's gate there is a pedestrian-only coastal road (unsealed) which extends out to the Wellington Harbour entrance heads. There are three lighthouses at the heads.

The hills surrounding Eastbourne provide important habitat for indigenous biodiversity and contain some of New Zealand's rarest and most endangered plant species.

All content from Kiddle encyclopedia articles (including the article images and facts) can be freely used under Attribution-ShareAlike license, unless stated otherwise. Cite this article:
Eastbourne, New Zealand Facts for Kids. Kiddle Encyclopedia.