The kauri is the largest New Zealand tree, growing mainly in the northernmost parts of the country

This article relates to the flora of New Zealand, especially indigenous strains. New Zealand's geographical isolation has meant the country has developed a unique variety of native flora. However, human migration has led to the importation of many other plants (generally referred to as 'exotics' in New Zealand) as well as widespread damage to the indigenous flora, especially after the advent of European colonisation, due to the combined efforts of farmers and specialised societies dedicated to importing European plants & animals.

While most of the world's ferns grow in tropical climates, New Zealand hosts an unusual number of ferns for a temperate country. These exhibit a variety of forms, from stereotypical feather-shaped tufted ferns and tree ferns to less typical filmy, leafy and climbing ferns. Both the koru, in the shape of an unfurling fern frond, and the silver fern are widely accepted symbols of New Zealand.

New Zealand has ten species of Tree Ferns, but there are numerous ground, climbing and perching smaller ferns to be found throughout the countries forests, the largest of which is the King fern. 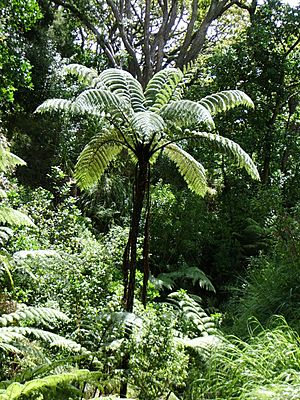 A Black Tree Fern in the Auckland Domain

New Zealand has a greater density of liverworts than any other country, due to its cool, wet and temperate climate. About half the species are endemic to New Zealand.

There are 606 species known in New Zealand. While these include some thallose liverworts, with liver-shaped thalli, most are leafy liverworts which can be confused with mosses and filmy ferns. Undescribed species, and those not previously recorded in New Zealand, continue to be found in lowland forests. Ninety species and varieties are listed on the 2001 Department of Conservation threatened plants list, and 157 liverwort species and varieties will be included on the next version of the list as a result of better knowledge of the group.

A three-volume work on liverworts in New Zealand is being written by John Engel and David Glenny, with the first volume published in 2008. The first volume will also be placed online in June 2009 as part of Floraseries.

There are 187 species of native grasses in New Zealand: 157 endemic and 30 indigenous species.

The grasses belong to the following tribes and genera:

There are 523 known moss species and 23 varieties in New Zealand, with 208 genera represented. 108 species and 11 genera are considered endemic. Most New Zealand mosses originated in Gondwana, so there are strong relationships with species in Tasmania, South-eastern Australia, and temperate parts of South America. The endemic genera are: 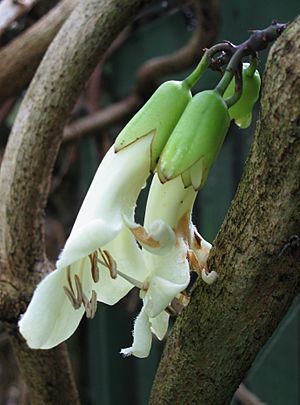 All content from Kiddle encyclopedia articles (including the article images and facts) can be freely used under Attribution-ShareAlike license, unless stated otherwise. Cite this article:
Flora of New Zealand Facts for Kids. Kiddle Encyclopedia.