Kunzea ericoides, commonly known as kānuka, kanuka, white tea-tree or burgan, is a tree or shrub in the myrtle family, Myrtaceae and is endemic to New Zealand. It has white or pink flowers similar to those of Leptospermum and from its first formal description in 1832 until 1983 was known as Leptospermum ericoides. The flowers have five petals and up to 25 stamens which are mostly longer than the petals. 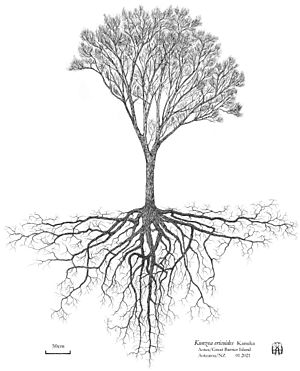 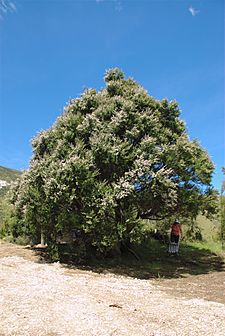 In Puhi Puhi valley, near Kaikoura

Kānuka was first formally described in 1832 by the French botanist Achille Richard who gave it the name Leptospermum ericoides from a specimen he collected in New Zealand. The description was published in Voyage de découvertes de l'Astrolabe - Botanique. In 1983, Joy Thompson changed the name to Kunzea ericoides, describing the differences between Leptospermum and Kunzea in Telopea. The specific epithet (ericoides) refers to the similarity of the habit of this species to that of Erica arborea. The suffix -oides is a Latin ending meaning "likeness".

Kānuka (or mānuka, as it was mostly known until the 1930s) is only known from the north of the South Island. It is found north of the Buller and Wairau Rivers, and is most common near Nelson. It mostly grows in shrubland and forest is coastal and lowland areas, rarely in subalpine shrubland.

Members of the kānuka complex are found throughout New Zealand occurring on the Three Kings Islands, Aotea (Great Barrier Island), from Te Paki (on the Aupouri Peninsula) at the northern tip of the North Island to as far south as Dunedin and Central Otago in the South Island, and Stewart Island. Within this range kānuka is widespread ranging from coastal scrub and sand dunes (where it may form a distinct forest type) through lowland and montane forest, with one member of the complex reaching elevations of 2000 metres above sea level. Kānuka often colonizes land recovering after a fire and is a critical part of the natural recovery of open disturbed ground to forest. With its small but abundant flowers it can colour a whole hillside white, almost giving the appearance of snow cover. It is widespread particularly in coastal scrub and colonizing land recovering after a fire or reverting to a natural state after being used for agriculture. It has also been recorded growing to altitudes of 2000 metres above sea level. The wood is very hard and although not durable in the ground it is used for wharf piles and tool handles. It is particularly popular as firewood, and burns with a great heat.

Kānuka can grow to around 10 metres high. Kākāriki parakeets (Cyanoramphus) use the leaves and bark of kānuka and the related mānuka tea trees to rid themselves of parasites. Apart from ingesting the material, they also chew it, mix it with preen gland oil and apply it to their feathers. Mānuka and kānuka are superficially similar species and are often confused with one another. The easiest way to tell the difference between them is to feel the foliage, kānuka leaves being soft, while mānuka leaves are prickly. K. ericoides may occur in the understory of certain rimu/nothofagus forests in the South Island. Typical associate understory species may include crown fern (Lomaria discolor) and Cyathodes fasciculata.

A variety of kānuka, the prostrate kānuka (Kunzea ericoides var. microflora), is one of the few plants that can survive hot ground in the immediate surroundings of geothermal features such as fumaroles and craters, for instance at "Craters of the Moon" (Karapiti), a geothermal area close to Taupo, New Zealand.

All content from Kiddle encyclopedia articles (including the article images and facts) can be freely used under Attribution-ShareAlike license, unless stated otherwise. Cite this article:
Kānuka Facts for Kids. Kiddle Encyclopedia.