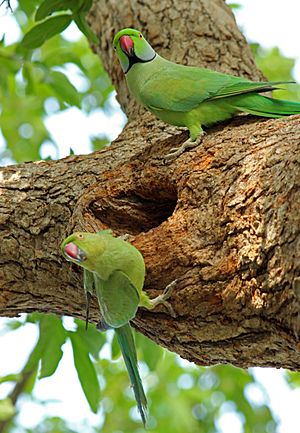 A parakeet is any one of a large number of small to medium-sized species of parrot, in multiple genera, that generally have long tail feathers. Older spellings still sometimes encountered are paroquet or paraquet.

The name parakeet is derived from the French word perroquet. It is however a pseudo-francism as perroquet means parrot in French, while the French for parakeet is perruche. 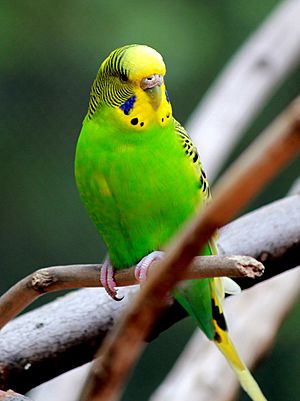 The Australian budgerigar, or shell parakeet, is a popular pet and the most common parakeet

The Australian budgerigar, also known as "budgie", Melopsittacus undulatus, is probably the most common parakeet. It was first described by zoologists in 1891. It is the most popular species of parakeet kept as a pet in North America and Europe. 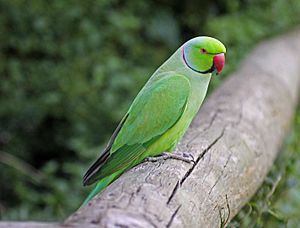 The term "grass parakeet" (or grasskeet) refers to a large number of small Australian parakeets native to grasslands such as the genus Neophema and the princess parrot. The Australian rosellas are also parakeets. Many of the smaller, long-tailed species of lories may be referred to as "lorikeets". The vernacular name ring-necked parakeet (not to be confused with the Australian ringneck) refers to a species of the genus Psittacula native to Africa and Asia that is popular as a pet and has become feral in many cities outside its natural range.

In aviculture, the term "conure" is used for small to medium-sized parakeets of the genera Aratinga, Pyrrhura, and a few other genera of the tribe Arini, which are mainly endemic to South America. As they are not all from one genus, taxonomists tend to avoid the term. Other South American species commonly called parakeets include the genus Brotogeris parakeets, the monk parakeet, and lineolated parakeets, although lineolateds have short tails.

Many different species of parakeets are bred and sold commercially as pets, the budgerigar being the third most popular pet in the world, after cats and dogs. Budgerigars are great companions for any age and can be easily trained.

Parakeets often breed more readily in groups; however, there can be conflicts between breeding pairs and individuals especially if space is limited. The presence of other parakeets encourages a pair to breed, which is why breeding in groups is better, however many breeders choose to breed in pairs to avoid conflicts and because that way they know for sure which parents produced any given birds. Parakeets produce about three to eight eggs on average.

All content from Kiddle encyclopedia articles (including the article images and facts) can be freely used under Attribution-ShareAlike license, unless stated otherwise. Cite this article:
Parakeet Facts for Kids. Kiddle Encyclopedia.