The rose-ringed parakeet (Psittacula krameri), also known as the ring-necked parakeet, is a medium-sized parrot in the genus Psittacula, of the family Psittacidae. It has disjunct native ranges in Africa and South Asia, and is now introduced into many other parts of the world where feral populations have established themselves and are bred for the exotic pet trade.

The rose-ringed parakeet is sexually dimorphic. The adult male sports a red and black neck ring, and the hen and immature birds of both sexes either show no neck rings, or display shadow-like pale to dark grey neck rings. Both sexes have a distinctive green colour in the wild, and captive bred ringnecks have multiple colour mutations including blue, violet and yellow. Rose-ringed parakeets measure on average 40 cm (16 in) in length, including the tail feathers, a large portion of their total length. Their average single-wing length is about 15 to 17.5 cm (5.9 to 6.9 in). In the wild, this is a noisy species with an unmistakable squawking call. Captive individuals can be taught to speak. They are a herbivorous and non-migratory species.

One of the few parrot species that have successfully adapted to living in disturbed habitats, it has withstood the onslaught of urbanisation and deforestation. As a popular pet species, escaped birds have colonised a number of cities around the world, including Northern and Western Europe. These parakeets have also proven themselves capable of living in a variety of climates outside their native range, and are able to survive low winter temperatures in Northern Europe. The species is listed as least concern by the International Union for Conservation of Nature (IUCN) because its population appears to be increasing, but its popularity as a pet and unpopularity with farmers have reduced its numbers in some parts of its native range. 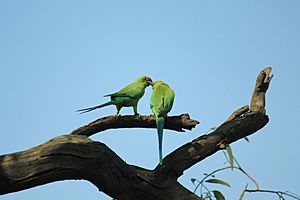 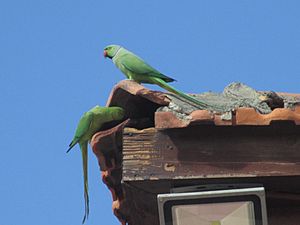 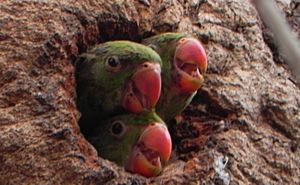 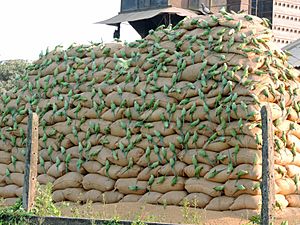 In India, they feed on cereal grains, and during winter also on pigeon peas. In Egypt during the spring, they feed on mulberry and in summer they feed on dates and nest inside palm trees and eat from sunflower and corn fields.

In captivity, rose-ringed parakeets will take a large variety of food and can be fed on a number of fruits, vegetables, pellets, seeds, and even small amounts of cooked meat for protein. Oils, salts, chocolate, alcohol, and other preservatives should be avoided.

In north-west India, Indian rose-ringed parakeets form pairs from September to December. They do not have life mates and often breed with another partner during the following breeding season. During this cold season, they select and defend nest sites, thus avoiding competition for sites with other birds. Feeding on winter pea crops provides the female with nutrients necessary for egg production. From April to June, they care for their young. Fledglings are ready to leave the nest before monsoon. 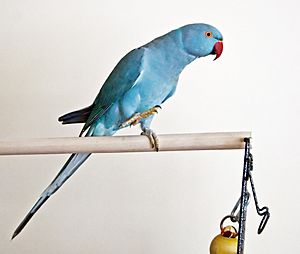 A blue colour morph mutation parakeet kept as a pet.

Colour mutations of the Indian rose-ringed parakeet subspecies have become widely available in recent years. A blue colour morph mutation of the rose ringed parakeet is also commonly kept in aviculture. Birds that display this mutation have solid light blue feathers instead of green, and lack the rings of their normal counterparts.

Both males and females have the ability to mimic human speech. First, the bird listens to its surroundings, and then it copies the voice of the human speaker. Some people hand-raise rose-ringed parakeet chicks for this purpose. Such parrots then become quite tame and receptive to learning.

All content from Kiddle encyclopedia articles (including the article images and facts) can be freely used under Attribution-ShareAlike license, unless stated otherwise. Cite this article:
Rose-ringed parakeet Facts for Kids. Kiddle Encyclopedia.