A solitary plant of Tecomanthe speciosa (also known as the Three Kings vine or akapukaea) was first discovered on the Three Kings Islands, 55 km off the northern tip of New Zealand, during a scientific survey in 1945. No other specimens have ever been found in the wild. Tecomanthe is a tropical genus not otherwise represented in New Zealand. Four other species of Tecomanthe occur in Queensland, Indonesia, New Guinea, and the Solomon Islands. 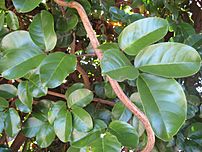 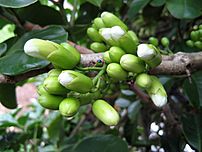 Tecomanthe speciosa is a vigorous twining climber growing up to 10m in height. The glossy, thick compound leaves consist of up to five leaflets. In autumn or early winter it bears long cream-coloured tubular flowers that emerge directly from the stem in large clusters. The flowers appear to be adapted to be pollinated by bats, despite the fact that bats are not part of the present-day fauna of the Three Kings Islands (though they may once have been present). Nevertheless, the flowers of plants growing in cultivation are readily pollinated by a large number of native and exotic birds. 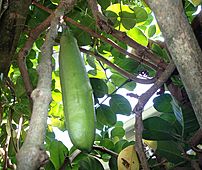 Although the plant may once have been common on the Three Kings, by the time of its discovery goats that had been introduced to the islands had reduced the entire population to a single specimen on Great Island, making it one of the world’s most endangered plants. The remaining specimen grew on a cliff that was so steep, that even the goats could not reach it. It was rescued by horticulturalists who took cuttings from the original plant and goats were subsequently eradicated from the island. The original specimen still grows in the wild, and has developed more vines through the natural process of layering in the years since its discovery.

It has not yet been formally assessed for the IUCN Red List, but a preliminary assessment of the conservation status of all New Zealand vascular plants found T. speciosa to be "Nationally Critical".

After a decade, the plants raised by the horticulturists finally set seed, and Tecomanthe speciosa has subsequently become popular in New Zealand gardens as a vigorous climber of tropical appearance. The plant requires warm conditions, and is very sensitive to frost, suffering damage if the temperature drops below -2C. It is readily grown from cuttings, layering and from seed. Seed must be sown fresh and should germinate within two weeks. The seedlings grow vigorously, and may flower within two or three years. Plants grown from cuttings may take up to five years or longer to flower.

All content from Kiddle encyclopedia articles (including the article images and facts) can be freely used under Attribution-ShareAlike license, unless stated otherwise. Cite this article:
Tecomanthe speciosa Facts for Kids. Kiddle Encyclopedia.