Podocarpus laetus is a species of conifer in the family Podocarpaceae, commonly known as Hall's tōtara, mountain tōtara or thin-barked tōtara. Previously known as Podocarpus hallii and Podocarpus cunninghamii, in 2015 it was realised that the much earlier name P. laetus has priority. Its common name results from the species being named after J. W. Hall, a New Zealand pharmacist.

It is found only in New Zealand. It can be found growing in both montane and subalpine forests but less common in lowland forests. 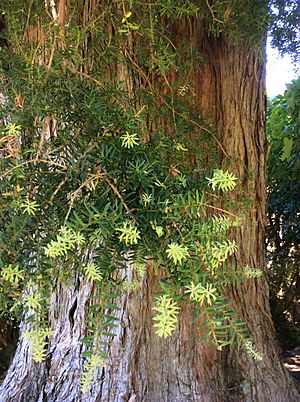 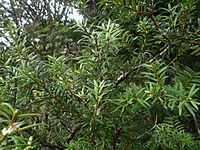 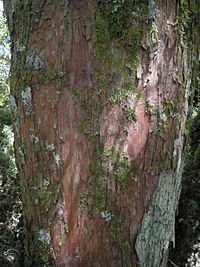 Hall's totara bark is thin and flaky compared to that of P. totara

P. laetus is distinguished from the more widely known lowland tōtara by its thinner bark, longer juvenile leaves and distribution at higher altitudes.

All content from Kiddle encyclopedia articles (including the article images and facts) can be freely used under Attribution-ShareAlike license, unless stated otherwise. Cite this article:
Podocarpus laetus Facts for Kids. Kiddle Encyclopedia.