Kids Encyclopedia Facts
This page is about a coastal grass species. For the grass species of arid Middle East, Africa and Australia, also commonly referred to as spinifex, see Triodia (plant). 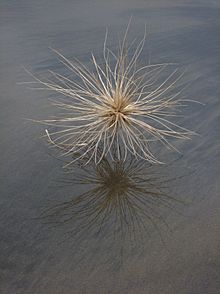 Spinifex is a genus of perennial coastal plants in the grass family.

They are one of the most common plants that grow in sand dunes along the coasts of Africa, Middle East, Asia, Australia, New Zealand and New Caledonia, with the ranges of some species extending north and west along the coasts of Asia as far as India and Japan. As they help stabilise the sand, these grasses are an important part of the entire sand dune ecosystem. The single species indigenous to New Zealand, Spinifex sericeus, is also found in Australia.

Confusingly, the word "spinifex" is also used as a common name referring to grasses in the related genus Triodia. Triodia however is native to inland Australia and refers to a group of spiny-leaved, tussock-forming grasses.

All content from Kiddle encyclopedia articles (including the article images and facts) can be freely used under Attribution-ShareAlike license, unless stated otherwise. Cite this article:
Spinifex (plant) Facts for Kids. Kiddle Encyclopedia.