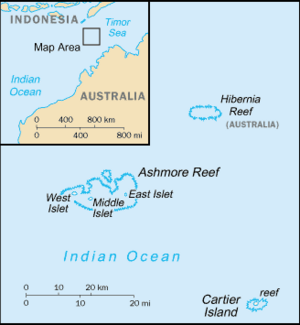 Location of the islands

The Territory of Ashmore and Cartier Islands is the collective name for two groups of small low-lying uninhabited tropical islands.The islands are in the Indian Ocean north-west of Australia and south of the Indonesian island of Roti. The Australian mainland is about 340 kilometres (210 mi) to the southwest, the island of Timor (and Roti next to it) is about 160 kilometres (99 mi) to the north.

The territory includes Ashmore Reef (West, Middle, and East Islets) and Cartier Island 70 kilometres (40 mi) east with, a total area of 199.45 square kilometres (77.0 sq mi) within the reefs and including the lagoons, and 114,400 square miles (3.2×1012 sq ft) of dry land. They have a long coastline, over 74 kilometres (46 mi), but there are no ports or harbours, only offshore anchorage. Nearby Hibernia Reef, 42 kilometres (26 mi) northeast of Ashmore Reef, is not part of the territory, because it has no permanently dry land area, although large parts of the reef become exposed during low tide.

The territory is administered from Canberra by the Australian Department of the Environment and Heritage. Therefore, it is a dependency within the commonwealth. The islands are visited by seasonal caretakers.

All content from Kiddle encyclopedia articles (including the article images and facts) can be freely used under Attribution-ShareAlike license, unless stated otherwise. Cite this article:
Ashmore and Cartier Islands Facts for Kids. Kiddle Encyclopedia.