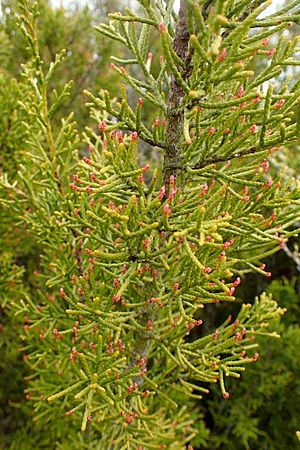 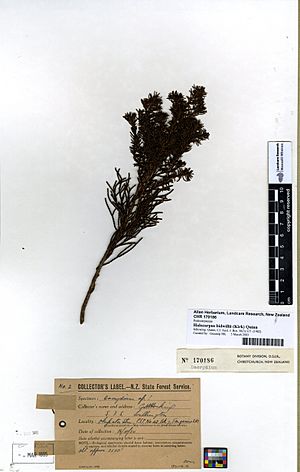 Specimen of Halocarpus bidwillii, or mountain pine, showing both mature scale like leaves at the bottom, and juvenile leaves at the top. Specimen from the Allan Herbarium in Lincoln, New Zealand. Image used with permission from Landcare Research 2019 copyright CC-BY 4.0

Halocarpus bidwillii, the mountain pine or bog pine, is a species of conifer in the family Podocarpaceae. It is native and endemic to New Zealand. 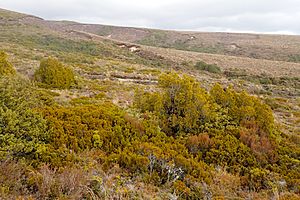 Although it is called a pine, the mountain pine is more like a shrub, anywhere from 2–12 feet high or up to 3.5 meters high, and with a short trunk that “rarely exceeds” 1 foot in diameter and more commonly has a thickness up to 38 cm. Bark takes on a red to brown appearance and leaves have a green color when fresh, but can become brown to red when they are dried out. Sometimes as the horizontal branches grow, they form roots forming a "bush" around the parent shrub which creates a vast mini-forest that looks like a huge, low tree or shrub. The parent tree may die, leaving its outliers intact which are thin and red. Thus from a distance, it may seem that one mountain pine is actually a whole forest of trees, perhaps explaining where the name “pine” arose to describe this short shrub.

Depending on the maturity of a mountain pine, the shrubs take on rather drastic differences in leaf appearance.  In the juvenile state, leaves are linear, flat and spreading much like a pine tree, while in the mature state, leathery leaves 1-2mm long take on an overlapping scaled appearance, much like the scales of a fish.  In the flowering months of October to December small male cones 3-5mm in length, take on a brown to red appearance at the end of the mountain pine’s scale like leaves, and stomata are able to be seen by the naked eye as white spots. Pollen particles are solitary, terminal, ca. 3–5 mm long. Appendage is adnate to base of carpel, cortex, inverted, with a drooping ovule. The fruit of mountain pine consists of a dark brown, black-brown to purple-brown seed in a fleshy, waxy white cup. Seeds are 2–3 mm long, subglobose, compressed, with a white to yellow aril. The aril is V-shaped under the seed. Seeds are hairless, smooth, 3.0-4.5 mm long (including arils), and take on a dark brown or dark brown to dark purple brown appearance; seeds are also typically shiny, oval oblong, and compressed.

In his initial discovery of the species, Kirk identified 2 forms of mountain pine within the species that he differentiated mostly on the basis of branch shape. The alpha or erecta form of mountain pine has flat and ribbed leaves with branches being slender, while the beta or reclinata form has distinct mid-rib leaves and stout branches. These two forms are very difficult however to differentiate and as such these species-specific distinctions aren’t made in current descriptions and literature of the species.

This species was named in honour of the botanist and explorer John Carne Bidwill.

Mountain pine is a species endemic to New Zealand.

Mountain pine are native to New Zealand and grow from Coromandel to the extreme south; as the latitude increases, they are found at lower altitudes. In the North Island, mountain pine can be found in Taupo county near Rotoaira and in the central volcanic plateau and Kaingaroa plains. In the South Island, as the name implies, mountain pine are common in mountainous regions in Nelson, Canterbury, and Otago, with some plants found as high as 4500 ft above sea level in the Canterbury alps. Mountain pine can also be found on Stewart Island directly at sea level.

The mountain pine has a wide range of habitats, but mostly prefers montane to subalpine habitats from 39º latitude southward. Within its range, the annual average temperature is 8.5℃, the coldest month average minimum temperature is -0.8℃, and the annual average precipitation is 2458 mm. In the North Island, mountain pine are found exclusively in montane to alpine habitats and usually between 600 –1500m elevation. However, mountain pine can also thrive in low land conditions, and their presence on Stewart Island at sea level serves as an example for this. Mountain pine are also hardy plants growing in a wide range of ground conditions. Mountain pine can grow in both bog environments and in dry stony ground, with mountain pine growing extremely well in the Te Anau stony ground environment and just as effectively in wetland margins, frost flats, and riverbeds.

Like all conifers, the mountain pine life cycle is dependent on cones.  Male and female flowers are found on separate trees – male cones 3-5mm long are at the tips of branches and female flowers grow solo or in pairs and form just below the tips of the branches.  From the time of seeding, male conifers will take about 2–3 years to reach maturity. When they have matured, male cones appear during the flowering season which runs from October to December, but most often occurs during October and November.  Depending on the exact location, cone development can vary with North Island mountain pine producing cones more toward the October end of the range.  By the end of November, the once juvenile reddish cones take on more brown character and begin to shed pollen.  Around this same time, ovules grow at the tips of the branches and once fertilized by the pollen they develop a white aril at the base. Seeds begin to develop in the following months up until the fruiting season, which occurs from February to June.  By February, green fruits mature, but do not ripen until mid to early March.  Once they begin to ripen, fruits ripen quickly and take on a purple to black color similar to the shade of an eggplant.

The seeds themselves are only 3-4mm long and have regular grooves stretching the length of the seed.  Mountain pine can often be confused with closely related H. biformis, but a key difference between these 2 species’ seeds is that mountain pine seeds are typically smaller and squatter than those of H. biformis.

In addition to insect predators, mountain pine also suffers from a nematode disease which is caused by the pine wood nematode.  Infected trees are characterized by having yellow to brown or red to brown needles, wilting, and stopped resin secretion.  In extreme cases, this disease can lead to death in which the wood takes on a blue appearance. Treatments for the disease are mostly done after tree death and consist of cleaning and cutting dead wood.

The epithet bidwillii is in honor of John Carne Bidwill (1815-1853) who was an Australian botanist born in England and became the first director of the Royal Botanic Gardens, Sydney.  However, H. bidwilli did not always identify with its current name.  Kirk first discovered the species in 1877 under the name Dacrydium bidwillii, a name that is still presently used at times to reference the species, and this naming was suggested by Sir Joseph Hooker.  It wasn’t until 1982 when C.J. Quinn proposed an alternative taxonomy for the species based on ovule morphology and orientation, that the species obtained the current scientific name of Halocarpus bidwillii.

Bog pines are easily recognized when fruiting by the waxy white (very slightly yellowish) arils subtending the seed.  Vegetatively compared with other species of Halocarpus, mountain pine have the growth habits of smaller multibranched shrubs to small trees, weak keel-shaped leaves, and more slender, initially quadrangular branchlets.  The seeds of mountain pine are distinguished from H. biformis (with which it most often confused) by the ventral and dorsal surfaces which are usually significant longitudinally grooved (sometimes only on the ventral surface).

When Kirk first described the mountain pine, he declared it to be of “little economic value” except perhaps for firewood. Perhaps he was unaware at the time, but Kirk should’ve specified that mountain pine could only be used for firewood without its bark.  Mountain pine is one of the few New Zealand conifers that is able to resist fire, mostly because of its thick bark, but also because of its ability to recover through basal resprouting after a fire event.  Other uses of the raw wood include timber production for use in buildings and railway sleepers.

Another potential use for mountain pine could be for decoration.  Kirk commented on the “attractive character” of mountain pine, citing its symmetrical growth, and suggested that it could become an ornamental plant. Aside from decoration and perhaps firewood, no other uses of mountain pine or its products have been described to date.

All content from Kiddle encyclopedia articles (including the article images and facts) can be freely used under Attribution-ShareAlike license, unless stated otherwise. Cite this article:
Mountain pine Facts for Kids. Kiddle Encyclopedia.