Tutu is a common name of Māori origin for plants in the genus Coriaria (Coriariaceae) found in New Zealand. 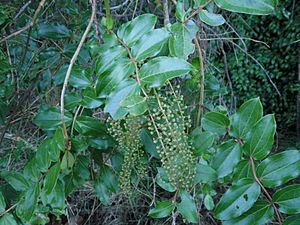 Six New Zealand native species are known by the name:

They are shrubs or trees; some are endemic to New Zealand. Most of the plant parts are poisonous, containing the neurotoxin tutin.

Both the seeds and sap of tutu are highly poisonous, resulting in many cattle deaths in the early days of European settlement. After removing the poisonous seeds, Māori people prepared a drink from the fruit, which they often boiled with a type of seaweed (rimu). The resulting jelly (rehia) was then fermented.

Honey containing tutin can be produced by honey bees feeding on honeydew produced by sap-sucking vine hopper insects (Scolypopa australis) feeding on tutu. The toxin is in the sap of the Tutu bush. This sap is eaten by the hoppers, but not all is digested. The undigested sap which contains a lot of plant sugars as well as tutin is excreted as honeydew onto the leaves of the bush. Bees then gather the honeydew and toxic honey is the result.

The last recorded deaths from eating honey containing tutin were in Northland, New Zealand, in 1890, although sporadic outbreaks of toxic honey poisoning continue to occur. Poisoning symptoms include delirium, vomiting, and coma.

All content from Kiddle encyclopedia articles (including the article images and facts) can be freely used under Attribution-ShareAlike license, unless stated otherwise. Cite this article:
Tutu (plant) Facts for Kids. Kiddle Encyclopedia.