Most of the species are shrubs but some are subshrubs (small shrubs) or small trees. Leaves are simple, opposite or whorled, with 3 to 9 major veins coming from the base.

The fruits look like berries but they are small nuts (achenes) protected by enlarged and colored petals. Fruits cannot be eaten because their seeds are poisonous; in some species, mainly those from New Zealand, the petals that protect the true fruits can be eaten. Several species of this genus can fix nitrogen from the air because they have bacteria of genus Frankia in their roots.

The name of the genus Coriaria was given by Linnaeus in 1753 in Species Plantarum (Vol. 2, page 1037). The type species is Coriaria myrtifolia L.

Coriaria comes from the Latin word corium, meaning "leather" because these plants have a substance named tannin which is used to make leather from skins.

The several New Zealand species are known by the Māori name of "tutu".

The genus has a very interesting geographic distribution. It is found in 5 regions: 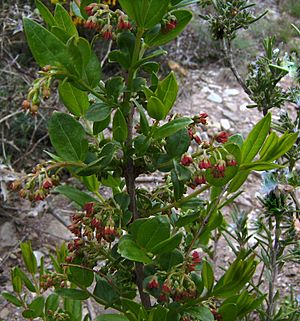 Some species of Coriaria are used to produce leather from skins of different animals (cattle, horses).

In New Zealand, the Maori people make a juice with the "fruits" (actually the petals) of "tutu". In Chile, the nuts are used to make poison for rats and mice.

Because they produce many bright, colored fruits, some species of Coriaria are used as ornamental plants.

In the genus Coriaria (y en la familia Coriariaceae) there are about 17 species.

All content from Kiddle encyclopedia articles (including the article images and facts) can be freely used under Attribution-ShareAlike license, unless stated otherwise. Cite this article:
Coriaria Facts for Kids. Kiddle Encyclopedia.