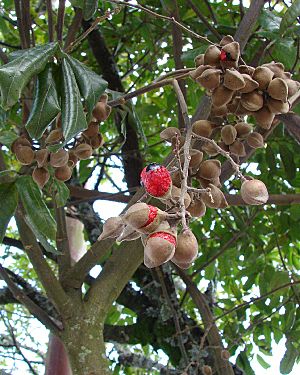 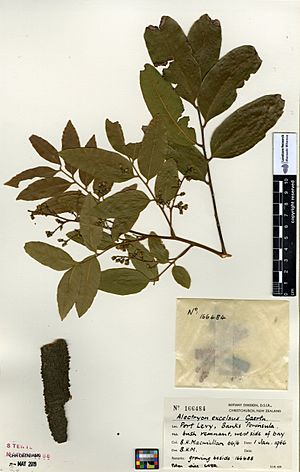 Alectryon excelsus leaves and bark. Taken from the bush remnants on the west side of Banks Peninsula.

Alectryon excelsus, commonly known as titoki (Māori: tītoki), is a shiny-leaved tree native to New Zealand, where it occurs in coastal and lowland forests. It is found throughout most of the North Island and from Banks Peninsula to central Westland in the South Island.

The tree was formerly known as New Zealand oak, but as with most New Zealand native trees, the Māori name is now more common than the English one.

Alectryon excelsus is a sub-canopy tree growing to 9 m (30 ft) in height. It has a twisting trunk with smooth dark bark, spreading branches and pinnate leaves. Adult leaflets do not have marginal teeth or usually have very few, blunt and shallow marginal teeth and usually leaflet margins are downturned, whereas, in juvenile leaflets have leaflets with strong teeth and flat along the edges. The length of this tree leaf are around 10-30 cm. This tree has pale gray to almost black skin with a smooth skin texture and has a stem diameter that reaches 50 cm or more.

Alectryon excelsus produces small purple flowers in spring and the seeds take up to a year to mature. The female flower has a small anther (‘without pollen’) and a short stemmed sari, whereas, the male flower has a long dangling stamen around the vestigial ovary. The colourful seed is initially contained in a hairy woody capsule which splits revealing bright red and black unpalatable fruit (the black portion being the seed). 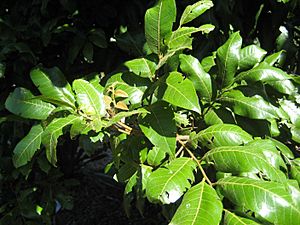 Alectryon excelsus is native to New Zealand but can be found in other places around the world. The tree has been located along street verges in San Francisco.

The ovary develops into a hairy and dense capsule with rusty, brown hair. In about one year, the capsule will mature and divide the red flesh tissue that surrounds one large seed. From this cleavage, it will show one large seed which is hidden for one year in the capsule and then, the seeds will fall to the ground and will grow into trees if they fall in the right place to support the growth of the tree or the seeds will be spread by New Zealand birds such as the tui, kereru, kokako and black birds. This tree will flower from spring to early summer. Some flowers of this tree are bisexual because female flowers and male flowers are not borne on the same tree.

This tree likes to grow in the places that have a lot of water such as wetlands. Titoki tree gravitates towards moist soil which contains many nutrients for growth along with fertile alluvial and sandy soils. The location characteristics best suited for this tree are: ‘fertile, well-drained soils along riverbanks and associated terraces'. The plant can grow in conditions from semi-shade to full sun.

The fruit of this tree is usually eaten by possums and birds. Some insects such as the unique 5-mm beetle and a small bronze beetle enjoy chewing the bark and the leaves. In addition, the leaves on a small titoki tree will be targeted by deer.

Parasites for this tree are more commonly located in leaves and fruit. Parasites most often found in the leaves are white and black moth caterpillars and slender shapes. They also damage the tree by consuming the leaves. Meanwhile, the parasite known as "titoki fruit borer" destroys the seeds of this tree by living inside the capsule and eating the seeds.

The titoki tree is one of the native trees in New Zealand that is traditionally planted by Maori people. Usually, the pulp fruit from this tree is consumed by Maori people while the wood is commonly used for making trainers and wheels because the wood is very elastic and strong. Furthermore, grains from this tree are used and processed into hair oil and the leaves of this tree will be soaked in the oil to provide a fragrant aroma. The production of oil is very traditional by crushing the seeds of the titoki tree using a tourniquet-style hemp bag after that Maori will extract it into greenish oil.

People now use the fruit for liquor production. The fruit attributes sweet and astringent taste factors to the alcohol. This product has been distilled and exported to Australia, Fiji, Japan, and the United Kingdom.

All content from Kiddle encyclopedia articles (including the article images and facts) can be freely used under Attribution-ShareAlike license, unless stated otherwise. Cite this article:
Titoki Facts for Kids. Kiddle Encyclopedia.