The headwaters in the Kaitoke Regional Park are closed to preserve the quality of the drinking water drawn off at Kaitoke to supply the greater Wellington area. Below Kaitoke is the Kaitoke Gorge, a popular destination for rafting. Below the gorge is Te Mārua, where the Mangaroa River joins the Hutt from the east. Further down, at Birchville, the Akatarawa River joins the Hutt from the west. Here it flows in a deep channel between the surrounding hills and is turned to flow across the Wellington Fault to Maoribank. The movement of the fault can be seen from the displacement of the river terraces in Harcourt Park. At the top of the Upper Hutt floodplain, the river makes a sharp turn against the bedrock at the foot of the cliff at Maoribank to flow down the valley. The Upper Hutt floodplain contains the greater portion of Upper Hutt city. The Whakatiki River joins the Hutt from the west and it is about this point the river starts to flow along the virtually straight Wellington geologic fault, which lies on the western side of the river valley. At the lower end of the Upper Hutt floodplain is Taita Gorge, which separates Upper Hutt from Lower Hutt; this gorge is significantly shorter and less constricting than Kaitoke Gorge. The river's outflow, at Petone, is into Wellington Harbour. The geological fault that the river previously followed continues as a steep bluff at the edge of the Wellington Harbour.

State Highway 2 follows the course of the river for most of its length, with the exception of the Kaitoke Gorge and the head waters, before crossing the Remutaka Range into the Wairarapa. 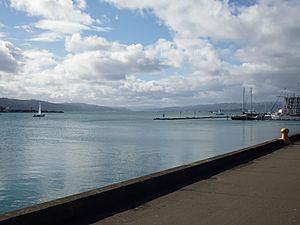 For most of its length, the Hutt is a shallow and sometimes braided river in a wide rocky bed, but in the Kaitoke gorge the river flows directly over bedrock, and approaching the mouth at Petone the river is narrower and the banks steeper. The larger populated areas in Upper Hutt and Lower Hutt are protected from flooding by stopbanks and introduced willow trees, as is common in New Zealand. The regular flooding of Lower Hutt resulted in highly fertile land and prior to the building of state housing by the first Labour Government starting in 1937, there were many market gardens in Lower Hutt.

The Hutt has moved significantly since European settlement, due to a major earthquake in 1855 that raised the riverbed.

The river can be walked or cycled from Upper Hutt to Petone along tracks on either side, though the eastern bank is more accessible. The Lower Hutt edition of Parkrun, the worldwide weekly 5-kilometre (3.1 mi) running series, runs along the last 2.5-kilometre (1.6 mi) section of the Hutt River from just north of the Ewen Bridge down to the Waione Bridge and back.

The river was named Hutt after Sir William Hutt, chairman of the New Zealand Company. This name was given by Captain Edward Main Chaffers and Colonel William Wakefield while charting Port Nicholson in 1839.

The river has a good stock of brown trout.

All content from Kiddle encyclopedia articles (including the article images and facts) can be freely used under Attribution-ShareAlike license, unless stated otherwise. Cite this article:
Te Awa Kairangi / Hutt River Facts for Kids. Kiddle Encyclopedia.