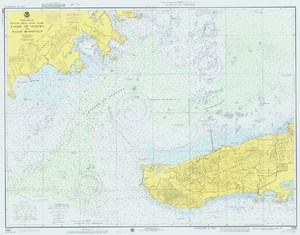 A nautical chart is a map which is used to show objects on the ocean. Nautical charts were very common from the 14th century to the 17th century. They are usually used by sailors to navigate.

All content from Kiddle encyclopedia articles (including the article images and facts) can be freely used under Attribution-ShareAlike license, unless stated otherwise. Cite this article:
Nautical chart Facts for Kids. Kiddle Encyclopedia.