Matiu/Somes Island, at 24.9 ha (62 acres), is the largest of three islands in the northern half of Wellington Harbour, New Zealand. It lies 3 kilometres (1.9 mi) south of the suburb of Petone and the mouth of the Hutt River, and about 5 kilometres (3 mi) northwest of the much smaller Makaro/Ward Island. 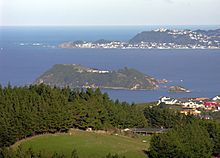 Matiu/Somes Island as seen from Normandale

Legend has it that both Matiu and Makaro Islands received their original Māori names from Kupe, the semi-legendary first navigator to reach New Zealand and get home again with reports of the new land. He named them after his two daughters (or, in some versions of the tale, nieces) when he first entered the harbour about 1000 years ago.

After European settlement, the island was known for over a century as Somes Island. In 1839 it fell under the control of the New Zealand Company along with much of the greater Wellington region. The island was renamed after Joseph Somes, the company's deputy-governor and financier at the time. In 1997 however, the New Zealand Geographic Board assigned the official bilingual name of Matiu/Somes in recognition of the island's colourful European and Māori histories.

Matiu/Somes Island has had an extensive Māori history and a varied, and a sometimes colourful and tragic, European one. Prior to the mid 17th century there were 2 Māori Pa on the island, however, like the Ngati Ira Pa on Ward Island, they were not permanently inhabited, being "Pa of refuge" where the tribespeople could retreat to in times of war. One was in the centre of the island and little more than the remains of some middens are left there, however there was another Pa on the northern tip of the island, strategically positioned with cliffs on three sides for ease of defence. 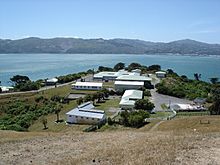 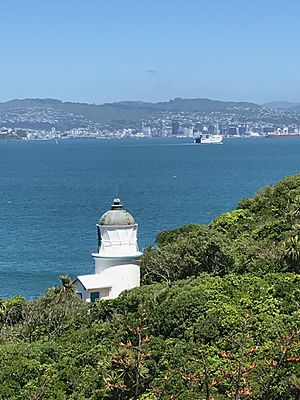 Lighthouse with Wellington City in the background

A lighthouse was built at the island's southwestern end in 1866, the first harbour light in New Zealand. The lighthouse that stands in place of the original today was constructed in 1900 and later automated. At various times throughout the 20th century it hosted enemy alien internees during wartime, and quarantine facilities for both human immigrants and (up to 1995) animals.

Its use as a quarantine facility began with the arrival of the England in 1872, carrying several passengers with smallpox. Passengers and crew were quartered in makeshift accommodation. On other occasions, new arrivals would spend ten minutes in a smokehouse of chlorine, potassium nitrate and sulphur fumes for de-lousing.

During World War I, the island housed an internment camp which imprisoned about 300 "enemy aliens." Prisoners during this time included many German prisoners of war and suspected Danish imposter Hjelmar von Danneville.

In 1942, the island was fortified with heavy anti-aircraft gun emplacements on the summit, but these were never used during the course of the war. This whole area was levelled flat for the purpose of this construction, with the result that 17 metres (56 ft) was removed from the island's previous overall height. A degaussing station was built to provide protection for ships against magnetic mines. Many of the physical features of these sites are present on the island today.

Matiu/Somes became part of Lower Hutt in 1989 and came under the full control of the Department of Conservation ("DOC") as a scientific and historic reserve in August 1995.

Ferry services from Matiu to the Wellington CBD and Days Bay 7 days a week and to Seatoun during weekends operate as part of ferries in Wellington. 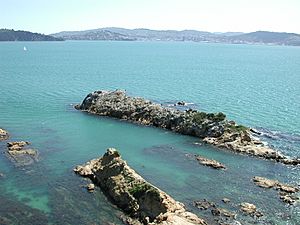 A distinct gully runs from the south of the quarantine station and terminates at the sea on the southern end of the island between two (now) largely forested ridges on either side to the east and west. Generally, this gully is a swampy area but it also represents an ephemeral watercourse and during and following periods of heavy rain a small creek flows down it.

The island is a stronghold for the little blue penguin, several species of shag, the spotted skink, the silver gull and several rare and endangered species of plants.

The Royal Forest and Bird Protection Society of New Zealand has been revegetating the island since 1984 and successfully eradicated rats and mice over a period between 1988 and 1989. Eleven male red-crowned kākāriki (parakeets) were first introduced to the island in 2004 and immediately began breeding with a further eleven released in 2005. There are more than 500 species of invertebrates on the island including a couple of species of wētā - Wellington tree wētā and Cook Strait giant wētā have been successfully transferred from Mana Island. A number of endangered plants species have found a refuge in the island.

The island is now home to 6 species of native reptiles - common skink (Oligosoma nigriplantare), spotted skink (Oligosoma lineoocellatum), copper skink (Cyclodina aenea) and the common gecko (Hoplodactylus maculatus). Brothers Island tuatara were released in 1998. Forest geckos (Hoplodactylus granulatus) were transferred to the island in 2006. North Island robins sourced from Kapiti Island were released in April 2006; they bred for the first time in late September and this is viewed as encouraging by DOC staff as it appears to indicate that the island ecosystem represents a suitable habitat for this species. A solar-powered speaker system to attract fluttering shearwaters was installed and began transmitting later that year.

Many of these projects have been supported by the community and the local iwi, Te Ati Awa. The Matiu/Somes Island Charitable Trust was established in 1998 as a partnership between Te Ati Awa and the general community to help protect, nurture and enhance the island by raising funds for projects that increased biodiversity and enhance visitors' enjoyment of the island. Through its active arm, "The Friends of Matiu/Somes", it encourages community participation in work on the island. It also works closely with DOC and community groups such as Forest and Bird.

Matiu/Somes Island is an increasingly popular tourist attraction and educational resource for local schools, with about 15,000 visitors per year. The island is free of introduced mammalian predators (such as stoats). Visitors to the island must make sure they are pest-free. Before arriving they must check, clean and seal all gear to make sure no pests, soil, or seeds are brought to the island.

Just to the north lies a much smaller island, Mokopuna Island. To protect endemic wildlife present – particularly nesting seabirds – landing by members of the public is prohibited here.

All content from Kiddle encyclopedia articles (including the article images and facts) can be freely used under Attribution-ShareAlike license, unless stated otherwise. Cite this article:
Matiu / Somes Island Facts for Kids. Kiddle Encyclopedia.