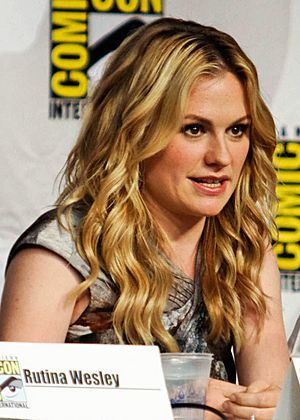 Anna Helene Paquin (born July 24, 1982) is a Canadian-New Zealand movie actress. She was born in Winnipeg, Manitoba to a French Canadian father and New Zealand mother. She won Academy Awards for The Piano at age 11 in 1994. She also performed in movies related to the X-Men franchise.

All content from Kiddle encyclopedia articles (including the article images and facts) can be freely used under Attribution-ShareAlike license, unless stated otherwise. Cite this article:
Anna Paquin Facts for Kids. Kiddle Encyclopedia.