The morepork (Ninox novaeseelandiae), also called the ruru or Tasmanian spotted owl, is a small brown owl found throughout New Zealand and Tasmania. Described by Johann Friedrich Gmelin in 1788, it was for many years considered to be the same species as the Australian boobook of mainland Australia until 1999. Its name is derived from its two-tone call. Four subspecies of the morepork are recognized, one of which is extinct and another that exists only as a hybrid population. The bird has almost 20 alternative common names, including mopoke and boobook—many of these names are onomatopoeic, as they emulate the bird's distinctive two-pitched call.

It has dark brown plumage with prominent pale spots, and golden-yellow eyes. It is generally nocturnal, though sometimes active at dawn and dusk, retiring to roost in secluded spots in the foliage of trees. The morepork feeds on insects and small vertebrates, hunting by pouncing on them from tree perches. The International Union for Conservation of Nature has assessed the morepork as being of least concern on account of its large range and apparently stable population.

English naturalist John Latham wrote of the New Zealand owl in his 1782 work A General Synopsis of Birds, but did not give it a binomial name. German naturalist Johann Friedrich Gmelin described the morepork in 1788.

"Morepork" has been designated the official name by the International Ornithological Committee.

Both Gerlof Fokko Mees and Ernst Mayr regarded the taxonomy of the boobook owl as extremely challenging, the latter remarking in 1943 that it was "one of the most difficult problems I have ever encountered". In his 1968 book Nightwatchmen of the Bush and Plain, Australian naturalist David Fleay observed that the boobooks from Tasmania more closely resembled those of New Zealand than those from mainland Australia, though he followed Mees in treating them as a single species.

Janette Norman and colleagues tested the cytochrome b DNA of three subspecies (as well as the powerful and rufous owls) to ascertain whether the closest relative was used in breeding with the last surviving female of the Norfolk boobook. They discovered that although the Norfolk boobook was similar in plumage to the Tasmanian boobook, it was genetically much closer to the New Zealand subspecies. In fact, the two were so close genetically that they considered whether the Norfolk boobook should be recognised as a separate taxon at all, although they conceded the two were easily distinguishable in appearance, so maintained the three as subspecies; the Tasmanian boobook only diverged by 2.7% from the other two, while the powerful and rufous owls diverged by 4.4% from each other. Leading from this, the Australian boobook was split from the Tasmanian boobook and morepork in volume 5 of the Handbook of the Birds of the World; however, several authors, including Les Christidis and Walter Boles, contested that the data had been misinterpreted from the Norman study, which had not sampled any Australian mainland boobooks at all. They treated the three taxa (southern, Tasmanian boobooks, and moreporks) as a single species.

Examining both morphological and genetic (cytochrome b) characters, Michael Wink and colleagues concluded that the Australian boobook was distinct from the morepork, as was the Tasmanian boobook, which should be raised to species status as Ninox leucopsis.

Four subspecies of Ninox novaeseelandiae are recognised by the IOC, two of which are extinct:

The morepork is 26 to 29 cm (10 to 11.5 in) long, with the female slightly larger than the male. Females are slightly heavier at 170–216 g (6.0–7.6 oz) compared with the male's 140–156 g (4.9–5.5 oz). The morepork has generally dark brown head and upperparts, with pale brown spots on head and neck and white markings on the rest of the upperparts, with a pale yellow-white supercilium (eyebrow), dark brown ear coverts, and buff cheeks. The eyes are yellow to golden-yellow. The feathers of the chin and throat are buff with dark brown shafts. The feathers of the underparts are mostly dark brown with buff and white spots and streaks, with the larger markings on the belly making it look paler overall. The upper tail is dark brown with lighter brown bars. The cere and bill is pale blue-grey with a black cutting edge. The feet are orange or yellow with blackish claws.

Young moreporks do not attain adult plumage properly until their third or fourth year. The tips of juvenile's feathers are white and fluffy, remnants of the nestlings' down. These are worn away over time, persisting longest on the head. The feathers of the head, neck, and underparts are fluffier overall. Their plumage is a darker and more greyish brown overall than that of adults.

In New Zealand's North Island, it is common from Rangaunu Harbour south to southern Taranaki and west of Tauranga, Lake Taupo, and Whanganui, as well as between Murupara and Hangaroa in the northeast, and southern Manawatu, Wellington, and Wairarapa in the south, and uncommon outside these areas. In the South Island, it is more common west of the Southern Alps, around Marlborough and in Southland. It is common on Stewart Island and offshore islands.

It is widespread in Tasmania and on King Island and other islands of Bass Strait. It has been recorded in southern Victoria, and once from New South Wales.

It occurs in most habitats with trees, in Tasmania predominantly eucalypt forests and in New Zealand forests dominated by Podocarpus, Nothofagus, Metrosideros, and other hardwoods, up to the alpine tree line. On Norfolk Island, it lives in forests of Norfolk Island pine (Araucaria heterophylla).

They are usually seen singly, in pairs, or in small family groups of an adult pair and up to three young.

During the day, moreporks sleep in roosts. Although mainly nocturnal, they are sometimes active at dawn and dusk. The main hunting times are evenings and mornings, with brief bursts of activity through the night. On dark nights, they often perch through the middle hours, and particularly if the weather is bad, may hunt by daylight, instead. 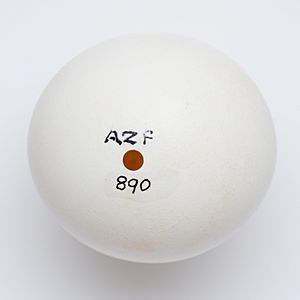 Egg from N. novaeseelandiae in the collection of Auckland Museum

Moreporks nest anywhere the trees are large enough to have hollows.

Although their main hunting technique is perch-and-pounce, they are agile birds with a swift, goshawk-like wing action and the ability to maneuver rapidly when pursuing prey or hawking for insects.

They hunt a variety of animals – mainly large invertebrates including scarab and huhu beetles, moths and caterpillars, spiders, grasshoppers, and in New Zealand, wētā. They also take almost any suitably sized prey, particularly small birds, rats, and mice. They can find suitable food in pine forests as well as native forest.

A widespread and generally common species, morepork is listed as being a species of least concern by the International Union for Conservation of Nature, on account of its large range and stable population, with no evidence of any significant decline. Like most species of owls, the morepork is protected by the Convention on International Trade in Endangered Species of Wild Fauna and Flora with its placement on the Appendix II list of vulnerable species, which makes the import, export, and trade of listed wild-caught animals illegal.

All content from Kiddle encyclopedia articles (including the article images and facts) can be freely used under Attribution-ShareAlike license, unless stated otherwise. Cite this article:
Morepork Facts for Kids. Kiddle Encyclopedia.