Taranaki is a region in the west of New Zealand's North Island, administered by the Taranaki Regional Council. It is named for its main geographical feature, the stratovolcano of Mount Taranaki.

The main centre is the city of New Plymouth. The New Plymouth District has over 65% of the population of Taranaki. New Plymouth is in North Taranaki along with Inglewood and Waitara. South Taranaki towns include Hawera, Stratford and Etham.

Since 2005, Taranaki has used the promotional brand "Like no other". 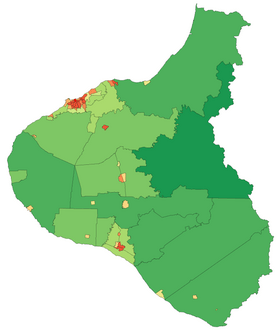 Taranaki is on the west coast of the North Island, surrounding the volcanic peak. The region has an area of 7258 km². The large bays north-west and south-west of Cape Egmont are the prosaically named North Taranaki Bight and South Taranaki Bight. 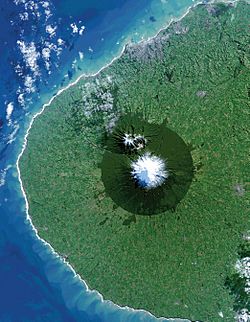 Mount Taranaki or Mount Egmont, the second highest mountain in the North Island, is the dominant feature of the region. A Māori legend says that Taranaki previously lived with the Tongariro, Ngauruhoe and Ruapehu mountains of the central North Island but fled to its current location after a battle with Tongariro. A near-perfect cone, it last erupted in the mid-18th century. The mountain and its immediate surrounds form Egmont National Park.

Māori had called the mountain Taranaki for many centuries, and Captain James Cook renamed it Egmont after the Earl of Egmont, the recently retired First Lord of the Admiralty who had encouraged his expedition. The mountain has two alternative official names, "Mount Taranaki" and "Mount Egmont".

View of Mount Taranaki from Stratford, facing west. Fanthams Peak is to the left of the main peak. The cow in the foreground is emblematic of Taranaki as a major dairying region.

The region is exceptionally fertile, thanks to generous rainfall and the rich volcanic soil. Dairy farming predominates, with Fonterra's Whareroa milk factory just outside of Hawera producing the largest volume of dairy ingredients from a single factory anywhere in the world. There are also oil and gas deposits in the region, both on- and off-shore. The Maui gas field off the south-west coast has provided most of New Zealand's gas supply as well as, at one time supporting two methanol plants (one formerly a synthetic-petrol plant called the Gas-To-Gasoline plant) at Motunui. More fuel and fertiliser is produced from a well-complex at Kapuni and a number of smaller land-based oilfields. With the Maui field nearing depletion, new offshore resources have been developed: The Tui field, 50 km south of Hawera, with reserves of 50,000,000 barrels (7,900,000 m3) of oil and the Pohokura gas field, 4.5 km north of Waitara.

The way the land mass projects into the Tasman Sea with northerly, westerly and southerly exposures results in many excellent surfing and windsurfing locations, some of them considered world-class.

Just under half the residents live in New Plymouth, with Hawera being the only other town in the region with a population over 10,000.

The area became home to a number of Māori tribes from the 13th century. From about 1823 the Māori began having contact with European whalers as well as traders who arrived by schooner to buy flax. In March 1828 Richard "Dicky" Barrett (1807–47) set up a trading post at Ngamotu (present-day New Plymouth). Barrett and his companions, who were armed with muskets and cannon, were welcomed by the Āti Awa tribe because of their worth assisting in their continuing wars with Waikato Māori. Following a bloody encounter at Ngamotu in 1832, most of the 2000 Āti Awa living near Ngamotu, as well as Barrett, migrated south to the Kapiti region and Marlborough.

In late 1839 Barrett returned to Taranaki to act as a purchasing agent for the New Zealand Company, which had already begun on-selling the land to prospective settlers in England with the expectation of securing its title. Barrett claimed to have negotiated the purchase of an area extending from Mokau to Cape Egmont, and inland to the upper reaches of the Whanganui River including Mt Taranaki. A later deed of sale included New Plymouth and all the coastal lands of North Taranaki, including Waitara.

European settlement at New Plymouth began with the arrival of the William Bryan in March 1841. European expansion beyond New Plymouth, however, was prevented by Māori opposition to selling their land, a sentiment that deepened as links strengthened with the King Movement. Tension over land ownership continued to mount, leading to the outbreak of war at Waitara in March 1860. Although the pressure for the sale of the Waitara block resulted from the colonists' hunger for land in Taranaki, the greater issue fuelling the conflict was the Government's desire to impose British administration, law and civilisation on the Māori.

The war was fought by more than 3500 imperial troops brought in from Australia, as well as volunteer soldiers and militia, against Māori forces that fluctuated between a few hundred and about 1500. Total losses among the imperial, volunteer and militia troops are estimated to have been 238, while Māori casualties totalled about 200.

An uneasy truce was negotiated a year later, only to be broken in April 1863 as tensions over land occupation boiled over again. A total of 5000 troops fought in the Second Taranaki War against about 1500 men, women and children. The style of warfare differed markedly from that of the 1860-61 conflict as the army systematically took possession of Māori land by driving off the inhabitants, adopting a "scorched earth" strategy of laying waste to the villages and cultivations of Māori, whether warlike or otherwise. As the troops advanced, the Government built an expanding line of redoubts, behind which settlers built homes and developed farms. The effect was a creeping confiscation of almost a million acres (4,000 km²) of land.

The present main highway on the inland side of Mount Taranaki follows the path taken by the colonial forces under Major General Trevor Chute as they marched, with great difficulty, from Patea to New Plymouth in 1866.

Armed Māori resistance continued in South Taranaki until early 1869, led by the warrior Titokowaru, who reclaimed land almost as far south as Wanganui. A decade later spiritual leader Te Whiti o Rongomai, based at Parihaka, launched a campaign of passive resistance against government land confiscation, which culminated in a raid by colonial troops on November 5, 1881.

The confiscations, subsequently acknowledged by the New Zealand Government as unjust and illegal, began in 1865 and soon included the entire Taranaki district. Towns including Normanby, Hawera and Carlyle (Patea) were established on land confiscated as military settlements. The release of a Waitangi Tribunal report on the situation in 1996 led to some debate on the matter. In a speech to a group of psychologists, Associate Minister of Māori Affairs Tariana Turia compared the suppression of Taranaki Māori to the Holocaust, provoking a vigorous reaction around New Zealand, with Prime Minister Helen Clark among those voicing criticism.

The Māori language spoken in Taranaki replaces the sound of h (both on its own and in wh) with a break. (The sound used in adjacent Wanganui is similar but not identical.) Thus the famous elder Hina Okeroa was universally known as Ina. The name of the river flowing through New Plymouth, Waiwakaiho, would be written Waiwhakaiho (meaning "water flowing downward") in central North Island Māori.

All content from Kiddle encyclopedia articles (including the article images and facts) can be freely used under Attribution-ShareAlike license, unless stated otherwise. Cite this article:
Taranaki Facts for Kids. Kiddle Encyclopedia.