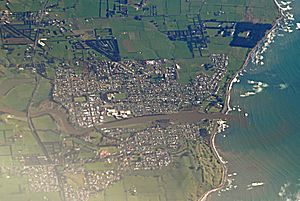 Waitara from the air

Waitara is a town in the northern part of the Taranaki region of the North Island of New Zealand. Waitara is located just off State Highway 3, 15 kilometres (9.3 mi) northeast of New Plymouth. Its population was 6312 in the 2013 census, an increase of 24 from 2006.

Waitara was the site of the outbreak of the Taranaki Wars in 1860 following the attempted purchase of land for English settlers from its Māori owners. Disputes over land that was subsequently confiscated by the Government continue to this day.

The commonly accepted meaning of the name Waitara is "mountain stream", though Maori legend also states that it was originally Whai-tara—"path of the dart". In 1867 the settlement was named Raleigh, after Sir Walter Raleigh. It reverted to its former name with the establishment of the borough of Waitara in 1904.

Prior to European colonisation, Waitara lay on the main overland route between the Waikato and Taranaki districts. Vestiges of numerous pā on all strategic heights in the district indicate close settlement and closely contested possession, just before and in early European times, by various tribes. Whalers and sealers, who had come from the northern hemisphere, gained help from and formed relationships with local Māori in the early 19th-century, but the area was largely vacated in the 1820s and 1830s following warfare between the resident Te Atiawa iwi (tribe) and those of iwi from north Auckland down to the Waikato. Some Te Atiawa were taken to Waikato as prisoners and slaves, but most migrated to the Cook Strait area in pursuit of guns and goods from whalers and traders.

Pākehā settlers who came to New Plymouth (founded in 1841) in the 1840s and 1850s viewed nearby Waitara as the most valuable of Taranaki's coastal lands because of its fertile soil and superior harbour. The New Zealand Company drew up plans for settlement from New Plymouth to beyond Waitara, and sold blocks to immigrants despite a lack of proof that the company’s initial purchase of the land had been legitimate. The company claimed that Te Atiawa had either abandoned the land or lost possession of it, owing to conquest by Waikato Māori. (The Land Claims Commission later upheld this view, but subsequently Governor Robert FitzRoy (in office 1843-1845) rejected it, as did the Waitangi Tribunal in 1996.)

Tensions between settlers and local Māori began as early as July 1842, when settlers who had taken up land north of the Waitara River were driven from their farms. A year later 100 men, women and children sat in a surveyors' path to disrupt the surveying of land for sale.

Between March and November 1848 Wiremu Kīngi, a Te Atiawa chief who staunchly opposed the sale of land in the Waitara area, returned to the district from Waikanae with almost 600 men, women and children and some livestock to retake possession of the land. They established substantial cultivations of wheat, oats, maize and potatoes, selling it to settlers and also for export; his followers also laboured on settler farms. The Waitangi Tribunal noted that the group allegedly eventually owned 150 horses and up to 300 head of cattle. 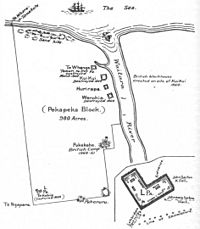 Location of the disputed Pekapeka block on the site of modern-day Waitara.

Despite Kingi's opposition however, payments were made by government agents secretly to Maori individuals for prospective sales of land in the Waitara area, prompting spates of violence between those supporting and opposing land sales.

In 1857 the issue came to a head with the offer for sale of land at Waitara and at Turangi, further to the north, by two individuals, Ihaia Te Kirikumara and a minor chief, Pokikake Te Teira. Teira's 600-acre (240 hectare) Waitara block, located on the west side of the Waitara River and known as the Pekapeka block, became the focal point of a dispute between the colonial government (chiefly representing settlers) and Māori over the right of individuals to sell land that Māori custom regarded as owned by the community.

The dispute ultimately led to the outbreak of war in Waitara on 17 March 1860, when 500 troops began a bombardment of Kingi's Te Kohia pā. The war, in which 2300 Imperial troops fought about 1400 Māori, ran for 12 months before a ceasefire was negotiated.

Later campaigns during the war included the major British defeat in the Battle of Puketakauere, close to Te Kohia pā, on 27 June 1860 which cost the lives of 32 Imperial troops and of five Māori. A major British sapping operation at the strongly defended Te Arei pā up the Waitara River began in February 1861, but was abandoned when a ceasefire was effected the following month. As a result of this operation, Colour Sergeant John Lucas was awarded the Victoria Cross.

In May 1863 war resumed in Taranaki. The government immediately renounced the earlier Waitara purchase, abandoning all claims to it, and instead created a plan for the confiscation of greater tracts of land under new laws, supposedly as a reprisal for the Oakura killings. In 1865 the Pekapeka block that had been at the heart of the initial dispute with Kingi was confiscated–therefore finding its way back into government control–on the basis that Kingi was at war, though the Waitangi Tribunal concluded there was no evidence he had engaged in hostilities after 1861.

In 1884 the Government returned as "Native reserves" 103,000 hectares of the 526,000 hectares of Taranaki land it had confiscated, although the land remained in government control. By 1990 half of the "reserves" had been sold to Pakeha settlers by the Native Trustee without reference to Maori. The remainder was leased to settlers with Maori receiving only a "peppercorn" rental return.

The Pekapeka Block–which had been the catalyst of the Taranaki Wars and, by extension, the policy of land confiscation–was divided up and given as endowments, or gifts, to the Waitara Borough Council and Taranaki Harbours Board. In 1989 the land was transferred to the New Plymouth District Council, which in turn voted in March 2004 to sell it to the Government with the intention of it being passed to Te Atiawa as part of the Waitangi Treaty settlement. That process was blocked by the High Court in November 2005 after a challenge by the Waitara Leaseholders Association. Association members, each of whom owns a house but leases the (once confiscated) land on which it stands, want to own the land freehold.

In September 1990 the Waitangi Tribunal began hearing 21 Treaty of Waitangi claims concerning the Taranaki district. Much of the tribunal's investigation focused on events around Waitara from 1840 to 1859. 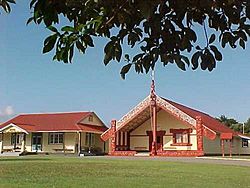 The tribunal presented its report to the Government in June 1996, noting: "The Taranaki claims could be the largest in the country. There may be no others where as many Treaty breaches had equivalent force and effect over a comparable time. For the Taranaki hapu, conflict and struggle have been present since the first European settlement in 1841 ... Taranaki Maori were dispossessed of their land, leadership, means of livelihood, personal freedom, and social structure and values. As Maori, they were denied their rights of autonomy, and as British subjects, their civil rights were removed. For decades, they were subjected to sustained attacks on their property and persons."

In its report, the tribunal observed that to the offence of local Maori, many street names in Waitara honoured the architects of the illegal land confiscation, including chief crown purchasing agent Donald McLean, Land Purchase Commissioner Robert Parris, Governor Thomas Gore Browne and military officers Charles Emilius Gold and Peter Cracroft. It said: "It is our view that name changes are needed. It is when leaders like Kingi, who understood the prerequisites for peace, are similarly memorialised on the land and embedded in public consciousness that those names will cease to stand for conquest and the Waitara war will end."

In November 1999 the New Zealand Government signed a Heads of Agreement with Te Atiawa to settle its claims, a process that would provide financial compensation and an apology for the confiscation of land.

All content from Kiddle encyclopedia articles (including the article images and facts) can be freely used under Attribution-ShareAlike license, unless stated otherwise. Cite this article:
Waitara, New Zealand Facts for Kids. Kiddle Encyclopedia.