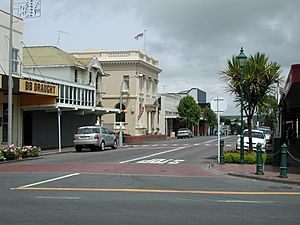 The town centre of Eltham

Eltham is a small inland town in South Taranaki, New Zealand, located 50 kilometres (31 mi) south of the city of New Plymouth and southeast of the volcanic cone of Mount Taranaki/Egmont. Stratford is 11 kilometres (6.8 mi) north, Kaponga 13 km west, and Hawera is 19 km (12 mi) south. State Highway 3 runs through the town.

Eltham is known as the cradle of the Taranaki dairy industry (the co-operative system in particular), and for being the one place in New Zealand that manufactured rennet which is important in cheesemaking. It was also the first place to export butter to England.

Settlement began in Eltham in the 1870s with blocks of densely forested land being taken up mainly to the north of Mountain Road. A profusion of sawmilling companies cleared the district which when grassed was found to be ideal for dairy farming. In 1884, the year Eltham was declared a town district, settlers, mainly from England, arrived there and the town had a population of 25. Eltham was declared a borough in 1901, and became part of South Taranaki District with the local body amalgamations of 1989.

A famous first for Eltham

High Street (which runs through the centre of town - as part of State Highway 3 connecting Stratford, Ngaere, Normanby and Hawera) and Bridge Street (which heads westward towards Kaponga and joins State Highway 45 near Opunake), were the first tar-sealed roads in New Zealand. 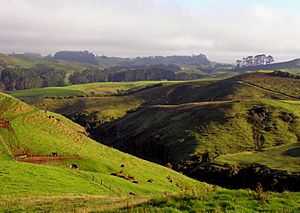 Eltham is also the gateway to Lake Rotokare, a scenic, natural lake surrounded by native bush (to the east of the town), and to the man-made Lake Rotorangi.

The two main watercourses which run through Eltham itself are the Mangawharawhara Stream, and the Waingongoro River.

The Mangawharawhara Stream runs to the east of the Main Trunk railway line, flows under the central business district via a culvert, and on past Eltham School and the Eltham Golf Club to the south of the town.

The Waingongoro River forms a western boundary to the town itself, flowing through the Presbyterian Church campsite (in the town's northwest) and Taumata Park (the town's main camping area and sports ground - in the western part of the town) and winding itself southwestward to meet the Tasman Sea at Ohawe Beach, near Hawera.

Eltham and the surrounding community enjoys a full library and council service (coming under the aegis of the South Taranaki District Council, based in Hawera). Services provided include being able to register your dog, pay your rates or inquire about obtaining a building permit. The LibraryPlus is also a NZ Post agency. Other services include a Tot Time for the under 5s and regular ‘coffee and blog’ meetings for locals to learn about new technologies in a friendly environment. The LibraryPlus also has three APN computers, offering free internet and Skype to the public.

All content from Kiddle encyclopedia articles (including the article images and facts) can be freely used under Attribution-ShareAlike license, unless stated otherwise. Cite this article:
Eltham, New Zealand Facts for Kids. Kiddle Encyclopedia.