Mount Taranaki, or Mount Egmont, is a dormant stratovolcano in the Taranaki region on the west coast of New Zealand's North Island. Although the mountain is more commonly referred to as Taranaki, it has two official names under the alternative names policy of the New Zealand Geographic Board. The 2,518 metres (8,261 ft) mountain has a secondary cone, Fanthams Peak (Māori: Panitahi), 1,966 metres (6,450 ft), on its south side. Because of its resemblance to Mount Fuji, Taranaki provided the backdrop for the movie The Last Samurai.

For many centuries the mountain was called Taranaki by Māori. The Māori word tara means mountain peak, and naki is thought to come from ngaki, meaning "shining", a reference to the snow-clad winter nature of the upper slopes. It was also named Pukehaupapa and Pukeonaki by iwi who lived in the region in ancient times.

Captain Cook named it Mount Egmont on 11 January 1770 after John Perceval, 2nd Earl of Egmont, a former First Lord of the Admiralty who had supported the concept of an oceanic search for Terra Australis Incognita. Cook described it as "of a prodigious height and its top cover'd with everlasting snow," surrounded by a "flat country ... which afforded a very good aspect, being clothed with wood and verdure".

When Marc-Joseph Marion du Fresne made landfall off Taranaki on 25 March 1772 he named the mountain Pic Mascarin. He was unaware of Cook's earlier visit.

It appeared as Mount Egmont on maps until 29 May 1986, when the Minister of Lands ruled that "Mount Taranaki" would be an alternative and equal official name. The Egmont name still applies to the national park that surrounds the peak and geologists still refer to the peak as the Egmont Volcano.

Taranaki is geologically young, having commenced activity approximately 135,000 years ago. The most recent volcanic activity was the production of a lava dome in the crater and its collapse down the side of the mountain in the 1850s or 1860s. Between 1755 and 1800, an eruption sent a pyroclastic flow down the mountain's northeast flanks, and a moderate ash eruption occurred about 1755, of the size of Ruapehu's activity in 1995/1996. The last major eruption occurred around 1655. Recent research has shown that over the last 9,000 years minor eruptions have occurred roughly every 90 years on average, with major eruptions every 500 years. 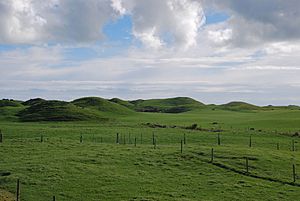 Remains from a lahar at Taranaki

Taranaki is unusual in that it has experienced at least five of its major eruptions by the method of cone collapse. Few volcanoes have undergone more than one cone collapse. The vast volume of material involved in these collapses is reflected in the extensive ringplain surrounding the volcano. There is also evidence of lahars being a common result of eruption.

Much of the region is at risk from lahars, which have reached as far as the coast. A volcanic event is not necessary for a lahar: even earthquakes combined with heavy rain or snow could dislodge vast quantities of unstable layers resting on steep slopes. Many farmers live in the paths of such possible destructive events.

Although volcanic eruptions are notoriously chaotic in their frequency, some scientists warn that a large eruption is "overdue". Research from Massey University indicates that significant seismic activity is likely again in the next 50 years. Prevailing winds would probably blow ash east, covering much of the North Island, and disrupting air routes, power transmission lines and local water supplies.

Older volcanoes in the area 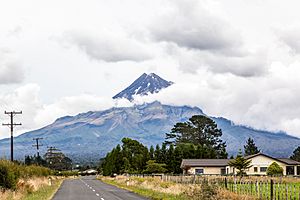 Taranaki sits on the remains of three older volcanic complexes that lie to the northwest. The Indo-Australian Plate is slowly moving relative to the magma source that feeds these volcanoes. This trend is reflected in Fanthams Peak, the newer secondary cone on the southeast side of Taranaki.

The oldest volcanic remnants consist of a series of lava plugs: Paritutu rock (156m), which forms part of New Plymouth's harbour, and the Sugar Loaf Islands close offshore. These have been dated at 1.75 million years.

On the coast 15 km southwest of New Plymouth is the Kaitake range (rising to 682m), last active approximately 500,000 years ago.

Nearest to Taranaki is the Pouakai complex. Pouakai may have originated around the same time as Kaitake but remained active until about 240,000 years ago. Much of Pouakai's large ringplain was obliterated by the Egmont Volcano, the hills near Eltham being the only remnant to the south. 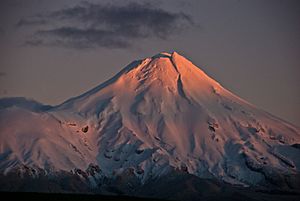 According to Māori mythology, Taranaki once resided in the middle of the North Island, with all the other New Zealand volcanoes. The beautiful Pihanga was coveted by all the mountains, and a great battle broke out between them. Tongariro eventually won the day, inflicted great wounds on the side of Taranaki, and causing him to flee. Taranaki headed westwards, following Te Toka a Rahotu (the Rock of Rahotu) and forming the deep gorges of the Whanganui River, paused for a while, creating the depression that formed the Te Ngaere swamp, then heading north. Further progress was blocked by the Pouakai ranges, and as the sun came up Taranaki became petrified in his current location. When Taranaki conceals himself with rainclouds, he is said to be crying for his lost love, and during spectacular sunsets, he is said to be displaying himself to her. In turn, Tongariro's eruptions are said to be a warning to Taranaki not to return. 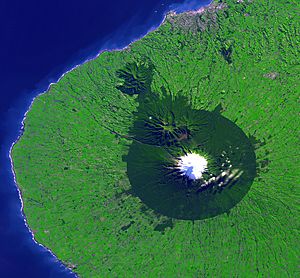 In 1865 the mountain was confiscated from Māori by the New Zealand Government under the powers of the New Zealand Settlements Act 1863, ostensibly as a means of establishing and maintaining peace amid the Second Taranaki War. The legislation was framed with the intention of seizing and dividing up the land of Māori "in rebellion" and providing it as farmland for military settlers. In 1839 the mountain had been climbed by the Swiss trained doctor and naturalist Ernst Dieffenbach. During his initial ascent, he identified the fast-flowing streams as being well suited to water driven mills. Dieffenbach was employed by the New Zealand Company to advise on the potential of land he explored in the North Island in 1839–40.

The mountain was returned to the people of Taranaki in 1978 by means of the Mount Egmont Vesting Act 1978, which vested it to the Taranaki Maori Trust Board. By means of the same Act, it was immediately passed back to the Government as a gift to the nation. The Waitangi Tribunal, in its 1996 report, Kaupapa Tuatahi, observed: "We are unaware of the evidence that the hapū agreed to this arrangement. Many who made submissions to us were adamant that most knew nothing of it." It cited a submission that suggested the political climate of 1975 was such that the board felt it was necessary to perform a gesture of goodwill designed to create a more favourable environment within which a monetary settlement could be negotiated.

In 2017, a record of understanding was signed between Taranaki iwi and the New Zealand government that will see the mountain become a legal personality. It is the third geographic feature in the country to be granted a legal personality, after Te Urewera and Whanganui River.

In 1881, a circular area with a radius of six miles (9.6 km) from the summit was protected as a Forest Reserve. Areas encompassing the older volcanic remnants of Pouakai and Kaitake were later added to the reserve and in 1900 all this land was gazetted as Egmont National Park, the second national park in New Zealand. With intensively-farmed dairy pasture reaching right up to the mostly-circular park boundary, the change in vegetation is sharply delineated in satellite images. There are parts of the national park where old growth forests are found.

The Stratford Mountain Club operates the Manganui skifield on the eastern slope. Equipment access to the skifield is by flying fox across the Manganui Gorge.

The Taranaki Alpine Club maintains Tahurangi Lodge on the north slope of the mountain, just next to the television tower. The lodge is frequently used as the base for public climbs to the summit held in the summer months. The various climbing and tramping clubs organize these public events and provide informal guides.

For the average person, Taranaki would be considered a moderate mountain to climb. It takes a person with good fitness level a day to make the up-and-back climb. Weather on the mountain can change rapidly, which has caught inexperienced trampers and climbers unawares. As of 27 June 2017, 84 people have died on the mountain since records began in 1891, many having been caught by a sudden change in the weather. In terms of fatalities this mountain is the second most dangerous mountain in New Zealand after Aoraki / Mount Cook

There are three roads leading part-way up the mountain. The highest is to East Egmont plateau, with a viewing platform and parking facilities for the skifield. It lies at the transition between subalpine scrub and alpine herbfields.

There are park visitor centres at North Egmont and at Dawson Falls on the southeast side.

The eastern side from Stratford leads to the Stratford Mountain House, and the ski field.

There is no road access on the western side. However, a road winds for 10 km through native bush over the saddle between Pouakai and Kaitake. Near the top of this road is the renowned Pukeiti Trust rhododendron garden.

All content from Kiddle encyclopedia articles (including the article images and facts) can be freely used under Attribution-ShareAlike license, unless stated otherwise. Cite this article:
Mount Taranaki Facts for Kids. Kiddle Encyclopedia.