Podocarpus () is a genus of conifers, the most numerous and widely distributed of the podocarp family, the Podocarpaceae. Podocarpus species are evergreen shrubs or trees, usually from 1 to 25 m (3 to 82 ft) tall, known to reach 40 m (130 ft) at times. The cones have two to five fused cone scales, which form a fleshy, berry-like, brightly coloured receptacle at maturity. The fleshy cones attract birds, which then eat the cones and disperse the seeds in their droppings. About 97 to 107 species are placed in the genus depending on the circumscription of the species.

Species are cultivated as ornamental plants for parks and large gardens. The cultivar 'County Park Fire' has won the Royal Horticultural Society's Award of Garden Merit.

Podocarpus species are evergreen woody plants. They are generally trees, but may also be shrubs. The trees can reach a height of 40 meters at their tallest. Some shrubby species have a decumbent growth habit. The primary branches form pseudowhorls around the trunk. The bark can be scaly or fibrous and peeling with vertical strips. Terminal buds are distinctive with bud scales that are often imbricate and can be spreading.

The leaves are simple and flattened, and may be sessile or short petiolate. The phyllotaxis or leaf arrangement is spiral, and may be subopposite on some shoots. The leaves are usually linear-lanceolate or linear-elliptic in shape, though they can be broader lanceolate, ovate, or nearly elliptic in some species. Juvenile leaves are often larger than adult leaves, though similar in shape. The leaves are coriaceous and have a distinct midrib. The stomata are usually restricted to the abaxial or underside of the leaf, forming two stomatal bands around the midrib.

Podocarpus spp. are generally dioecious, with the male pollen cones and female seed cones borne on separate individual plants, but some species may be monoecious. The cones develop from axillary buds, and may be solitary or form clusters.

The pollen cones are long and catkin-like in shape. They may be sessile or short pedunculate. A pollen cone consists of a slender rachis with numerous spirally arranged microsporophylls around it. Each triangular microsporophyll has two basal pollen-producing pollen sacs. The pollen is bisaccate.

The seed cones are highly modified with the few cone scales swelling and fusing at maturity. The cones are pedunculate and often solitary. The seed cone consists of two to five cone scales of which only the uppermost one or rarely two nearest the apex of the cone are fertile. Each fertile scale usually has one apical ovule. The infertile basal scales fuse and swell to form a succulent, usually brightly colored receptacle. Each cone generally has only one seed, but may have two or rarely more. The seed is attached to the apex of the receptacle. The seed is entirely covered by a fleshy modified scale known as an epimatium. The epimatium is usually green, but may be bluish or reddish in some species.

The natural distribution of the genus consists of much of Africa, Asia, Australia, Central and South America, and several South Pacific islands. The genus occurs from southern Chile north to Mexico in the Americas and from New Zealand north to Japan in the Asia-Pacific region.

Podocarpus and the Podocarpaceae were endemic to the ancient supercontinent of Gondwana, which broke up into Africa, South America, India, Australia-New Guinea, New Zealand, and New Caledonia between 105 and 45 million years ago. Podocarpus is a characteristic tree of the Antarctic flora, which originated in the cool, moist climate of southern Gondwana, and elements of the flora survive in the humid temperate regions of the former supercontinent. As the continents drifted north and became drier and hotter, podocarps and other members of the Antarctic flora generally retreated to humid regions, especially in Australia, where sclerophyll genera such as Acacia and Eucalyptus became predominant. The flora of Malesia, which includes the Malay peninsula, Indonesia, the Philippines, and New Guinea, is generally derived from Asia, but includes many elements of the old Gondwana flora, including several other genera in the Podocarpaceae (Dacrycarpus, Dacrydium, Falcatifolium, Nageia, Phyllocladus, and the Malesian endemic Sundacarpus), and also Agathis in the Araucariaceae. 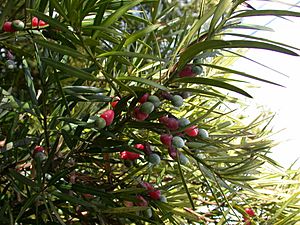 The two subgenera, Podocarpus and Foliolatus, are distinguished by cone and seed morphology.

In Podocarpus, the cone is not subtended by lanceolate bracts, and the seed usually has an apical ridge. Species are distributed in the temperate forests of Tasmania, New Zealand, and southern Chile, with a few occurring in the tropical highlands of Africa and the Americas.

In Foliolatus, the cone is subtended by two lanceolate bracts ("foliola"), and the seed usually lacks an apical ridge. The species are tropical and subtropical, concentrated in eastern and southeastern Asia and Malesia, overlapping with subgenus Podocarpus in northeastern Australia and New Caledonia.

Species in family Podocarpaceae have been reshuffled a number of times based on genetic and physiological evidence, with many species formerly assigned to Podocarpus now assigned to other genera. A sequence of classification schemes has moved species between Nageia and Podocarpus, and in 1969, de Laubenfels divided the huge genus Podocarpus into Dacrycarpus, Decussocarpus (an invalid name he later revised to the valid Nageia), Prumnopitys, and Podocarpus.

Podocarpus is related to yews, and as with yews, the stems, leaves, flowers, and pollen of Podocarpus are all poisonous. Additionally, the leaves, stems, bark, and pollen are cytotoxic. The male Podocarpus blooms and releases this cytotoxic pollen in the spring and early summer. Heavy exposure to the pollen, such as with a male Podocarpus planted near a bedroom window, can produce symptoms that mimic the cytotoxic side effects of chemotherapy.

Several species of Podocarpus are grown as garden trees, or trained into hedges, espaliers, or screens. Common garden species used for their attractive deep-green foliage and neat habits include P. macrophyllus, known commonly as Buddhist pine, fern pine, or kusamaki, P. salignus from Chile, and P. nivalis, a smaller, red-fleshy-coned shrub. Some members of the genera Nageia, Prumnopitys, and Afrocarpus are marketed under the genus name Podocarpus.

The red, purple, or bluish fleshy cone (popularly called a "fruit") of most species of Podocarpus are edible, raw or cooked into jams or pies. They have a mucilaginous texture with a slightly sweet flavor. They are slightly toxic, so should be eaten only in small amounts, especially when raw.

Some species of Podocarpus are used in systems of traditional medicine for conditions such as fevers, coughs, arthritis, sexually transmitted diseases, and canine distemper.

A chemotherapy drug used in treatment of leukemia is made from Podocarpus.

All content from Kiddle encyclopedia articles (including the article images and facts) can be freely used under Attribution-ShareAlike license, unless stated otherwise. Cite this article:
Podocarpus Facts for Kids. Kiddle Encyclopedia.