Kids Encyclopedia Facts
Not to be confused with Flora of Antarctica, the plants currently found on the continent Antarctica. 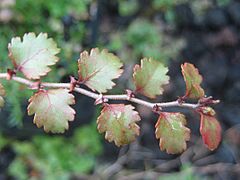 The Antarctic flora is a distinct community of vascular plants which evolved millions of years ago on the supercontinent of Gondwana. It is now found on several separate areas of the Southern Hemisphere, including southern South America, southernmost Africa, New Zealand, Australia and New Caledonia. Joseph Dalton Hooker was the first to notice similarities in the flora and speculated that Antarctica had served as either a source or a transitional point, and that land masses now separated might formerly have been adjacent.

Based on the similarities in their flora, botanist Ronald D'Oyley Good identified a separate Antarctic Floristic Kingdom that included southern South America, New Zealand, and some southern island groups. In addition, Australia was determined to be its own floristic kingdom because of the influx of tropical Eurasian flora that had mostly supplanted the Antarctic flora and included New Guinea and New Caledonia in the Paleotropical floristic kingdom.

Millions of years ago the climate in Antarctica was warmer, and was able to support flora well into the Neogene. This included forests of podocarps and southern beech. Antarctica was also part of the ancient supercontinent of Gondwana, which gradually broke up by plate tectonics starting 110 million years ago. The separation of South America from Antarctica 30–35 million years ago allowed the Antarctic Circumpolar Current to form, which isolated Antarctica climatically and caused it to become much colder. The Antarctic flora subsequently died out in Antarctica, but is still an important component of the flora of southern Neotropic (South America) and Australasian realms, which were also former parts of Gondwana.

South America, Madagascar, Africa, India, Australia, New Zealand, and Antarctica were all part of the supercontinent Gondwana, which started to break up in the early Cretaceous period (145–66 million years ago). India was the first to break away, followed by Africa, and then New Zealand, which started to drift north. By the end of the Cretaceous, South America and Australia were still joined to Antarctica. Paleontologist Gilbert Brenner identified the emergence of a distinct southern Gondwanan flora by the late Cretaceous period in the cooler and humid southern hemisphere regions of Australia, southern South America, southern Africa, Antarctica, and New Zealand; it most resembled the flora of modern-day southern New Zealand. A drier northern Gondwanan flora had developed in northern South America and northern Africa. 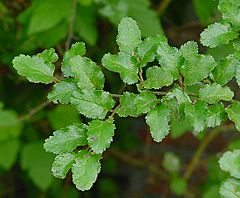 Africa and India drifted north into the tropical latitudes, became hotter and drier, and ultimately connected with the Eurasian continent. Today, the flora of Africa and India have few remnants of the Antarctic flora. Australia drifted north and became drier as well; the humid Antarctic flora retreated to the east coast and Tasmania, while the rest of Australia became dominated by Acacia, Eucalyptus, and Casuarina, as well as xeric shrubs and grasses. Humans arrived in Australia 50–60,000 years ago and used fire to reshape the vegetation of the continent; as a result, the Antarctic flora, also known as the Rainforest flora in Australia, retreated to a few isolated areas composing less than 2% of Australia's land area.

The woody plants of the Antarctic flora include conifers in the families Podocarpaceae, Araucariaceae and the subfamily Callitroideae of Cupressaceae, and angiosperms such as the families Proteaceae, Griseliniaceae, Cunoniaceae, Atherospermataceae, and Winteraceae, and genera like southern beech (Nothofagus) and fuchsia (Fuchsia). Many other families of flowering plants and ferns, including the tree fern Dicksonia, are characteristic of the Antarctic flora.

Investigations of Upper Cretaceous and Early Tertiary sediments of Antarctica yield a rich assemblage of well-preserved fossil dicotyledonous angiosperm wood which provides evidence for the existence, since the Late Cretaceous, of temperate forests similar in composition to those found in present-day southern South America, New Zealand and Australia. It is suggested a paleobotanical habitat similar to the extant cool temperate Valdivian rainforests.

There are two conifer and at least seven angiosperm morphotypes recorded in the Antarctica palaeoflora. Conifers include Cupressinoxylon, which is the more common, and Podocarpoxylon. The angiosperm component includes two species of Nothofagoxylon, one species of Myrceugenelloxylon (similar to Luma, in the extant family Myrtaceae), and one species of Weinmannioxylon (similar to Eucryphia in the extant family Cunoniaceae). Two other species are assigned to genera Hedycaryoxylon (Monimiaceae) and Atherospermoxylon (Atherospermataceae).

The continent of Antarctica itself has been too cold and dry to support virtually any vascular plants for millions of years. The scanty vegetation of Antarctica is a result of the chilling temperature, lack of sunlight, little rainfall, inferior soil quality and lack of moisture, due to the inability of the plants to absorb water available in the form of ice. Antarctica's extant flora presently consists of around 250 lichens, 100 mosses, 25-30 liverworts, and around 700 terrestrial and aquatic algal species. Two flowering plants, Deschampsia antarctica (Antarctic hair grass) and Colobanthus quitensis (Antarctic pearlwort), are found on the northern and western parts of the Antarctic Peninsula. Species of moss endemic to Antarctica include Grimmia antarctici, Schistidium antarctici, and Sarconeurum glaciale

All content from Kiddle encyclopedia articles (including the article images and facts) can be freely used under Attribution-ShareAlike license, unless stated otherwise. Cite this article:
Antarctic flora Facts for Kids. Kiddle Encyclopedia.