Guaynabo is a municipality in the northern part of Puerto Rico, located in the northern coast of the island, north of Aguas Buenas; south of Cataño; east of Bayamón; and west of San Juan. Guaynabo is spread over 9 wards and Guaynabo Pueblo (the downtown area and the administrative center of the suburb).

Guaynabo is considered, along with its neighbors – San Juan and the municipalities of Bayamón, Carolina, Cataño, Trujillo Alto and Toa Baja – to be part of the San Juan metropolitan area. It is also part of the larger San Juan-Caguas-Guaynabo Metropolitan Statistical Area, (the largest MSA in Puerto Rico).

The first European settlement in Puerto Rico, Caparra, was founded in 1508 by Juan Ponce de León in land that is today part of Guaynabo. Ponce de León resided there as first Spanish governor of Puerto Rico. This settlement was abandoned in 1521 in favor of San Juan. The ruins of Caparra remain and are a U.S. National Historic Landmark. The Museum of the Conquest and Colonization of Puerto Rico, which features artifacts from the site and others in Puerto Rico, is located on the grounds.

Guaynabo is divided into several barrios or districts: 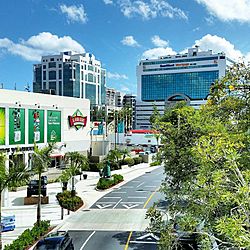 Guaynabo's old BSN team, the Guaynabo Mets, won national championships in 1980, 1982 and 1989, commanded by the player whom the Mario Morales Coliseum was named after, Mario "Quijote" Morales. The Conquistadores de Guaynabo, or Guaynabo Conquistadores, are the Guaynabo Mets replacement and still play in the Mario Morales Coliseum. The Mets de Guaynabo are the local women's volleyball team that play in the LVSF, or The Liga de Voliebol Superior Femenino. They have not won any championships yet. They also play in the Mario Morales Coliseum. Guaynabo Fluminense FC is Guaynabo's professional soccer team that plays in the Puerto Rico Soccer League. The league started in 2008 and Guaynabo's current position in the league is 4th place. Guaynabo Fluminense FC play their matches at the Jose Bonano Stadium that was originally made for baseball, but became a soccer arena after the Puerto Rico Baseball League was cancelled for the 2008 season. It was at the same year that the Puerto Rico Soccer League was starting to take place. In the 2009 season, Guaynabo Fluminense FC moved to the Sixto Escobar Stadium.

Guaynabo serves as a host city to four foreign consulates with business in Puerto Rico:

All content from Kiddle encyclopedia articles (including the article images and facts) can be freely used under Attribution-ShareAlike license, unless stated otherwise. Cite this article:
Guaynabo, Puerto Rico Facts for Kids. Kiddle Encyclopedia.