Aguas Buenas, commonly known as "La Ciudad de las Aguas Claras" ( Good Waters) or "The City of Clear (Good) Waters", is a municipality of Puerto Rico located in the Central Mountain Range, north of Cidra, south of Bayamón, Guaynabo and San Juan; east of Comerio; and north-west of Caguas. Aguas Buenas is spread over 9 wards and Aguas Buenas pueblo (The downtown area and the administrative center of the city). It is part of the San Juan-Caguas-Guaynabo Metropolitan Statistical Area.

Aguas Buenas was originally a sector of Caguas known as Aguabuena. In 1798, a group of residents started establishing their houses near some of the rivers in the area and started calling the sector Aguas Claras.

The quantity of residents incremented with time and on July 25, 1832, they organized a meeting and commissioned Francisco de Salas Torres and Ramón Díaz to do the necessary arrangements for the region to be declared a municipality. A resident, Julian López, offered part of his estate to be used for the construction of a town square, a church, the city hall, and the priest house.

The town was officially founded on May 25, 1838 and the name was changed to Aguas Buenas. Francisco de Salas Torres was declared the first mayor. Initially, the economy of the town relied on coffee plantations and commerce. At the end of the 19th century, the town's population was close to 7,000.

Several rivers flow through Aguas Buenas. Some of them are the Bayamón River, and several small rivers that are part of the Río Grande de Loíza, like Bairoa, Caguitas, and Cañas. 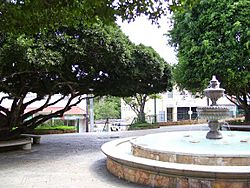 Aguas Buenas is divided into 10 barrios, including the downtown area:

Some of the places of the landmarks and places of interest in Aguas Buenas are its town square. The Aguas Buenas Caves are also an important landmark, as well as the Palito and La Tiza mountains.

Aguas Buenas has an amateur baseball team called the Tigers.

Several festivals and annual events are held in Aguas Buenas. The Salsa, Bomba & Plena Festival is held in the late summer, while the Fiestas Patronales are held in September 8. There's also an Agricultural Fest held in May and the "Festival Folklórico de Campo y Pueblo" in January. The annual Carnival is also held in March.

The flag of Aguas Buenas features a blue triangle with the base at the hoist. The triangle has a solitary white star, like the national banner. A second triangle appears interposed with the first one, in yellow, with its point reaching the other end of the flag. The main field of the flag, under both triangles, is color green.

The coat of arms features a four-paneled shield. The upper left panel shows the Virgin of Monserrate, while the upper right panel features a Taíno, a symbol of the original inhabitants of this region. At the bottom right panel, lies a cornucopia containing the native fruit of Aguas Buenas. This panel represents how the agriculture was the primary source of income for the town. In the lower left panel, there are four maracas and a güicharo, typical instruments of the "jibaros" of Aguas Buenas and Puerto Rico. The crown, as with other municipalities of Puerto Rico, consists of three towers.

To reach the town of Aguas Buenas, visitors must take the Puerto Rico Highway 52 to the city of Caguas. From there, road #156 leads directly to the town square. Other roads lead to nearby towns like Comerío.

All content from Kiddle encyclopedia articles (including the article images and facts) can be freely used under Attribution-ShareAlike license, unless stated otherwise. Cite this article:
Aguas Buenas, Puerto Rico Facts for Kids. Kiddle Encyclopedia.