Kids Encyclopedia Facts
Not to be confused with Bayamo.

Bayamón is a municipality of Puerto Rico located on the northern coastal valley, north of Aguas Buenas and Comerío; south of Toa Baja and Cataño; west of Guaynabo; and east of Toa Alta and Naranjito. Bayamón is spread over 11 wards and Bayamón Pueblo (the downtown area and the administrative center of the city). It is part of the San Juan-Caguas-Guaynabo Metropolitan Statistical Area.

The Taíno people, the historic indigenous peoples who encountered European explorers and settlers, were the long time settlers in this area. The Spanish colonist Juan Ramírez de Arellano established Bayamón as a Spanish settlement on May 22, 1772. Two beliefs exist about the origin of name Bayamón. According to one belief it was named after the local Taíno chief, Bahamon. As per the other belief the name was derived from the Taíno word Bayamongo, which is a river that runs across this region. In turn implying that Bayamón is the area around this main river, which later on became the center of city's development.

In 1821, Marcos Xiorro, an ethnic African slave, planned to lead a revolt against the sugarcane plantation owners and the Spanish Colonial government in Puerto Rico. The slave conspiracy was revealed and suppressed, but Xiorro became a hero among the slaves. He is part of Puerto Rico's folklore. Marco Xiorro was owned by Vicente Andino, a militia captain who owned a sugarcane plantation in Bayamón.

The Municipality of Bayamón sits on the Northern Coastal Plain region of Puerto Rico. It is bordered by the municipalities of Toa Baja, Cataño, Comerío, Aguas Buenas, Toa Alta, Naranjito, and Guaynabo. Bayamón has a surface area of 43.5 square miles (113.1 km2). The terrain is mostly plain, but includes some peaks such as La Peña and Vergaras.

Bayamón is Puerto Rico's second-largest municipality and is part of the large metropolitan area centered on San Juan. Other cities included in the metropolitan area are Guaynabo, Cataño, Toa Baja, Canóvanas, Carolina and Trujillo Alto. Bayamón is served by the San Juan airport. Despite the city's size, it has no weather reporting station.

The rivers that pass through Bayamón include the Río Bayamón, Río Hondo, Río Minillas, Río Bucarabones and Río Cuesta Arriba.

Bayamón is divided into twelve barrios, with the following populations: 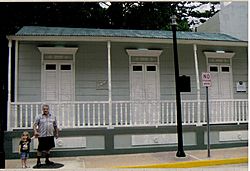 Bayamón is the site of several notable Puerto Rican landmarks and places of interest. Bayamón Central Park is a public park where people gather and relax. Bayamon also hosts the Braulio Castillo Theater, the Francisco Oller Museum, and the José Celso Barbosa Monument. The Bayamón City Hall building is notable by being built across a major divided highway. While walking through a connecting corridor, right above the road, pedestrians can see passing cars underneath. It is believed to be the only building of its class in the world.

One of the most popular attractions in Bayamón is the Parque de las Ciencias. It is a science-themed park with various exhibitions and attractions. It is the only place, outside of the United States, where NASA rockets and parts are exhibited. It is located in the middle of karstic hills. An observation building on one of the hills gives a good view of the metropolitan area. That building also hosts antennas for government and civil communication.

El parque del tren was a park featuring what was then Puerto Rico's only working train (domestic commercial flights as well as highways and vehicle use had overtaken the railroads in Puerto Rico) It also featured a DC-3, which had been used by United Airlines. In 2001, the park was dismantled and destroyed in the course of major road construction, still underway. What is left of the park is a small plaza for activities and an area for jogging and passive entertainment.

A suspension bridge in Bayamón is a pedestrian-only bridge, believed to be one of only three of its kind in Puerto Rico.

Bayamón is the site of several annual festivities. The festivities in honor of Santa Cruz, the town's patron saint, are held in May. Also, José Celso Barbosa's birthday is celebrated in July. There's also an artisans festival celebrated that month. Known as La Ciudad del Chicharrón (Pork Rind City), there's a festival dedicated to it in July as well. 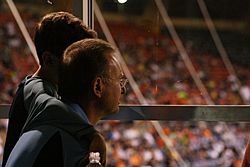 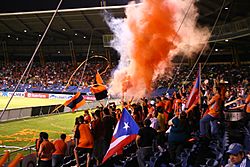 There are several professional and amateur sports team based in Bayamón. The Vaqueros de Bayamón are the local basketball team that plays at the Baloncesto Superior Nacional league. They are currently the team with the most championships in the history of the league with 14, the last of which was achieved in 2009. The team played at the Coliseo Rubén Rodríguez.

The Vaqueros de Bayamón was also the name of the baseball club which played from 1974 through 2003 in the Professional Baseball League of Puerto Rico, and played its home games at Juan Ramón Loubriel Stadium.

The city also has a female volleyball team, called the Vaqueras de Bayamón, which plays for the Liga de Voleibol Superior Femenino.

Recently, Bayamón has become popular for being the hometown of the Puerto Rico Islanders (now known as Puerto Rico FC) of the North American Soccer League. The team plays at Juan Ramon Loubriel Stadium in Bayamón. Another team, Bayamón FC, started playing in the stadium in the Puerto Rico Soccer League in the 2009 season. Sevilla Bayamón FC, now called Sevilla-FC Juncos, used to play in the stadium, until they moved to the town of Juncos due to ownership and financial problems.

The famous boxing fight between Alexis Argüello and Alfredo Escalera dubbed The Bloody Battle of Bayamon (their first; their equally legendary rematch was held in Rimini, Italy) was held in Bayamón in 1978. Also, professional boxers Luis Del Valle, Wilfredo Vazquez and Wilfredo Vazquez Jr. are from Bayamón. International Boxing Hall of Fame member Hector Camacho was born in Bayamon.

The Paseo del Rio (Paseo Lineal) near the Bayamón River is a 6-mile stretch shared by joggers, walkers and cyclists. It is divided in two lanes, one for the bicycles and the other for running or walking.

Parque Nacional Julio Enrique Mónagas has trails used by mountain bikers to train and compete. It also has cliffs where rappelling enthusiasts can practice.

The current flag of Bayamón features the Scandinavian Cross found in many Nordic Cross flags. It was embroidered by Mrs. Gloria M. León and maintains the design and colors of its Coat of Arms.

This shield is a symbol and synthesis of the history and the values which distinguish the city of Bayamón. The main colors of the shield are blue and silver, representing the waters of the Bayamón river and recalling that it was on these banks that the first hydraulic sugarcane refinery of Puerto Rico was established in 1549. The center contains the Holy Cross (Santa Cruz), patron of the first church of the municipality and the name of the old sugarcane refinery "Santa Cruz", which was the historical origin of the town of Bayamón. The sugarcane flowers (guajanas) allude directly to the sugarcane industry that is of social and economic importance to the origin and development of Bayamón.

The five-tower crown, which is used for cities, was assigned to Bayamón as an exception for its extraordinary urban development, the magnitude of its population and for its religious dignity, which will possibly be raised to become Episcopal seat. The motto "IN HOC SIGNO VINCES" makes reference to Emperor Constantine when in the 4th century had the vision in which the victory was promised to him if it accepted the Cross of Christianity as his banner. 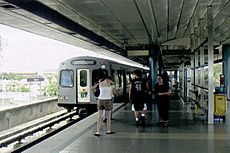 Bayamón is the final stop for the Tren Urbano. Three of its stops are located within the city.

Bayamón serves as the host city for foreign consular representation in Puerto Rico for the following nations:

All content from Kiddle encyclopedia articles (including the article images and facts) can be freely used under Attribution-ShareAlike license, unless stated otherwise. Cite this article:
Bayamón, Puerto Rico Facts for Kids. Kiddle Encyclopedia.