Toa Baja is a municipality of Puerto Rico located in the northern coast, north of Toa Alta and Bayamón; east of Dorado; and west of Cataño. Toa Baja is spread over 5 wards, including Toa Baja Pueblo (The downtown area and the administrative center of the city). It is part of the San Juan-Caguas-Guaynabo Metropolitan Statistical Area.

Toa Baja considered to be a part of the Metropolitan Area. It shares its metropolitan area status with San Juan, Bayamón, Guaynabo, Cataño, Carolina and Trujillo Alto.

Toa Baja is located fifteen minutes by car from San Juan and one hour from Ponce.

The region of what is now Toa Baja belonged to the Taíno region of Toa and Bayamón, which was located on the north coast of Puerto Rico. The regions were led by cacique Aramana and Majagua respectively. During the Spanish colonization, a farm was settled in the region around 1511 where Spanish settlers tried to learn from the Taínos how to grow fruits and vegetables. Some of the families that settled in the region were the Marrero, Salgado, and Martínez, which came from the Canary Islands.

In 1745, the town was officially organized, with the parish being built in 1749. It was dedicated to Nuestra Señora de la Concepción (Our Lady of the Immaculate Conception). It is said that in 1776 there were six cattle ranches and 12 sugar cane estates in the region. However, rises in the flow of nearby rivers were problematic for the population. Because of this, in 1841 a group of residents requested the settlement to be transferred to what is now Dorado. The town of Dorado was officially founded the next year.

In 1902, after the U.S. invasion, the Legislative Assembly of Puerto Rico approved the consolidation of several municipalities, which resulted in the annexation of Toa Baja to the city of Bayamón. However, in 1905 the law was annulled, and Toa Baja regained its status as an independent town. In 2010, Toa Baja was among the top ten municipalities in Puerto Rico, in terms of population, with 89,609.

The town of Toa Baja is located in the Northern Coastal Plains of the island, in the karst zone. It has an area of 62.4 km2 (24.0 miles2). The terrain consists mostly of alluvial deposits and clay-like surface as a result of the surrounding waters.

The elevations range from 60 to 150 meters above sea level, with most of its highest parts located in the south. The rest of the area is mostly plain. The northern part of Toa Baja is characterized for its mangroves and marshes, while the southern part is classified as typical karst area.

There are three main rivers in Toa Baja: Río la Plata, Río Cocal, and Río Hondo. La Plata is the longest river in the island and crosses Toa Baja in the east. Cocal is the natural boundary between Toa Baja and Dorado. 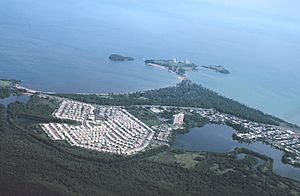 Like most municipalities, Toa Baja celebrates its fiestas patronales annually. They begin in June 30 and are dedicated to Saint Peter. There are other festivals celebrated through the year. A Crafts Festival (Feria de Artesanías) is celebrated in March, and a Beach Festival in July.

The Fiestas de la Santa Cruz are celebrated during May, with the participation of various churches and cultural groups. It is dedicated to the Saint Cross, and lasts nine nights. Also, in October, the town celebrates the Festival de la Zafra, with musical groups of bomba and plena.

Toa Baja doesn't have a team in the island's main male sports leagues. They do have a female volleyball team from the Liga de Voleibol Superior Femenino, the Llaneras de Toa Baja.

Toa Baja's official flag features two vertical bands: the left side is green and the right side is gold. The green band represents the plains of the Toa River (now known as La Plata), and the golden band represents the sun. The green band features two keys, one across the other. One is gold and the other silver, symbolizing the Apostle Saint Peter, the patron saint of the city.

Toa Baja's coat of arms features a green waving stripe, representing the Toa River, one of the first mentioned in the history of Puerto Rico. Like the flag, it features two keys, one across the other, symbolizing Saint Peter, patron saint of the town. The coat has the letters "F" and "J" to each side of the keys, representing Ferdinand II of Aragon and V of Castile, and his daughter, Joanna of Castile, sovereign of Castile and León.

The gold fields above and below the green stripe represent the wealth of the city. It also feature handfuls of yucca, one of the main crops of this area. It constitutes a symbol of the Taínos who cultivated it, and whose main food was cassava or bread of yucca. Two sugar cane stems surround the shield, representing the cultivation and industry of sugar cane, which was the main source of Toa Baja's economy.

Toa Baja is approximately 25 minutes in non-rush hour from San Juan by car, however, it may take up to 90 minutes in rush hour. The main road to the city is the PR-22 and Road #165.

All content from Kiddle encyclopedia articles (including the article images and facts) can be freely used under Attribution-ShareAlike license, unless stated otherwise. Cite this article:
Toa Baja, Puerto Rico Facts for Kids. Kiddle Encyclopedia.